The 2nd generation iPad, introduced by Steve Jobs in March of 2011, has officially been marked as an obsolete product worldwide. Released less than a year after the launch of the original ‌‌iPad‌‌, the second-generation ‌‌iPad‌‌ marked a breakthrough for the product line and set the groundwork for years to come. 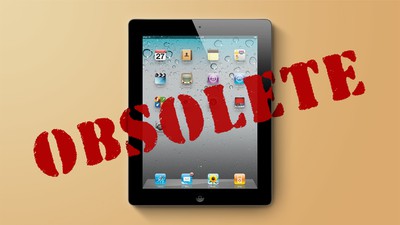 Apple added the ‌iPad‌ 2 to its "vintage and obsolete" product list in May of 2019, which marked the ‌iPad‌ as obsolete in all countries except the United States and Turkey, where local law required Apple to continue to consider it a vintage product. Yesterday, however, Apple updated its list to add the new ‌iPad‌ to its official obsolete list, deeming it obsolete worldwide.

The second-generation ‌iPad‌ included an updated design that was 33% thinner than the original ‌iPad‌. The new ‌iPad‌ also sported new capabilities, including a front-facing camera for FaceTime calls, a gyroscope, and an updated dual-core A5 processor, twice as fast as the original ‌iPad‌ and up to nine times faster in graphics. The ‌iPad‌ was also offered in both white and black models.

Apple classifies products that have been discontinued for at least seven years as "obsolete," meaning that they are unable to receive any hardware service from Apple or its service providers.

dandeco
Yeah, for Mother's Day 2011 my dad had gotten my mom an iPad 2, and early this year my mom was getting frustrated with the iPad 2, especially since she couldn't run the newest versions of the apps she uses to watch streaming and TV on due to it only supporting up to iOS 9. So I figured since my brother and I have been getting steady paychecks again (especially since I got that computer tech job with the electronics recycling/reselling company), I decided that he and I could chip in and get her the newest iPad model for this year's Mother's Day! (We got her the regular base-line 32 GB Wi-Fi model in Space Gray, costing $329, especially since her iPad 2 was the base-line 16 GB model). She sure was happy to get this new iPad from her sons!
Score: 15 Votes (Like | Disagree)

saudor
I still have mine for old apps and nostalgia. really loved the thing
Score: 11 Votes (Like | Disagree)

DavidLeblond
Oh man, I picked the wrong week to put mine up for sale on eBay, didn't I?

Mr. Dee
I remember watching the keynote in my hotel room in March 2011 when Steve Jobs launches it. It was moving. I don’t think I even wanna watch it again because you could clearly see this was the end of the road for him.
Score: 5 Votes (Like | Disagree)
Read All Comments