In addition to reviews lifting for the new Apple TV 4K, Apple marketing executive Tim Twerdahl spoke with CNN Underscored's Jacob Krol about the latest generation of the streaming box, which launches this Friday. 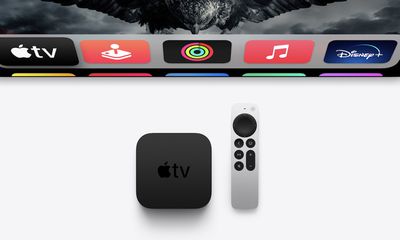 "We think there's a tremendous amount of value in this $179. When we talk about the best way to watch TV, I sort of think about it at three levels," Twerdahl said. Those three levels, according to Twerdahl, are hardware specs that deliver the best experience possible, having content that people want, and seamless integration with other Apple products.

Twerdahl said Apple's focus with gaming has been on Apple Arcade, which he also said delivers a tremendous value, but he admitted that the new Apple TV 4K is not designed to compete directly with consoles like the Xbox or PlayStation.

"Our focus on gaming has been more recently on arcade stuff, because we think that that's a great value for customers, there's a tremendous amount of content in there," said Twerdahl. "And we've done a lot to make that experience fantastic. Most notably, probably support for all these different game controllers."

"It's probably not designed to compete directly with the Xboxes and PlayStations of the world," added Twerdahl. "They bring something to the market that I think is unique and great for really hardcore gamers."

Apple Arcade is Apple's subscription-based gaming service, providing access to a catalog of over 100 games without ads or in-app purchases across the iPhone, iPad, Mac, and Apple TV, with pricing set at $4.99 per month. The recent tvOS 14.5 update added support for the latest PS5 and Xbox Series X game controllers on the Apple TV.

The new Apple TV 4K has been available to order since April 30, with most orders beginning to arrive this Friday, May 21.

OMG!. What a relief. This is good news. Good news, indeed. I was afraid Apple's marketing executive might come out and tell the news media that the Apple TV 4K offered terrible value.
Score: 47 Votes (Like | Disagree)

Honest question: What advantages does Apple TV bring to a Smart TV?

My TV already has a smart hub that does more than I can use, it can record shows and AirPlay comes built into it, so I can seamlessly mirror my iPhone or iPad screen, or even use it as a monitor wirelessly. I do not even have a set top box, the TV can already handle the TV-input from the provider.

* Faster, smoother interface due to a much faster CPU
* Tight integration with Apple services and devices
* You can use iPhone as a remote in a pinch
* Availability of some games, including most Apple Arcade games
* Wider selection of apps (NBC, ABC, Crunchyroll, Plex, CBS News, you name it)
* Now, the usability and convenience of the remote is far better than you'll find on any TV remore
* Cast audio to HomePod stereo pair via AirPlay
* AirPlay screen mirroring has significantly less lag and significantly fewer compression artifacts on Apple TV versus a smart TV
Score: 34 Votes (Like | Disagree)

Honest question: What advantages does Apple TV bring to a Smart TV?

My TV already has a smart hub that does more than I can use, it can record shows and AirPlay comes built into it, so I can seamlessly mirror my iPhone or iPad screen, or even use it as a monitor wirelessly. I do not even have a set top box, the TV can already handle the TV-input from the provider.

By not connecting your TV to WiFi you can also save yourself from having everything you view tracked and sold to advertisers. I think companies like Vizio go a step further and actually record anything displayed on screen so they can track stuff that isn’t from a built-in app. And if you’re using a Samsung or LG, you’ll see no ads in the menus when there’s no network connected.
Score: 31 Votes (Like | Disagree)

jonnyb098
Is it nice? Yes. A tremendous value? Absolutely not. With most Tv's supporting airplay now and every major streaming service the only point of an apple TV is to have specific features like arcade and fitness+....(oh wait now you can stream that to tvs via airplay now).......so yeah. For 179 they should bundle a game controller and 3 months of arcade and do that gaming bundle. At most this should be $149 otherwise.
Score: 21 Votes (Like | Disagree)

Lounge vibes 05
I actually agree with him.
Even though I think $179 is just a bit steep, and I think them selling the old 2015 model for $149 still is a complete rip off, I do think that it is the best streaming box out there.
It definitely has the smoothest and easiest to use user interface, it supports all my iTunes purchases over the years, it has a decent remote, and it definitely supports the most formats.
Not to mention, you can’t beat that ecosystem integration.
Score: 20 Votes (Like | Disagree)

GeoStructural
Honest question: What advantages does Apple TV bring to a Smart TV?

My TV already has a smart hub that does more than I can use, it can record shows and AirPlay comes built into it, so I can seamlessly mirror my iPhone or iPad screen, or even use it as a monitor wirelessly. I do not even have a set top box, the TV can already handle the TV-input from the provider.
Score: 19 Votes (Like | Disagree)
Read All Comments