When Apple first introduced the new 12.9-inch iPad Pro, a report said that the new iPad wouldn't be compatible with the previous generation Magic Keyboard due to an increase in thickness. Apple later confirmed that the older Magic Keyboard might not close properly when paired with the new ‌iPad Pro‌. 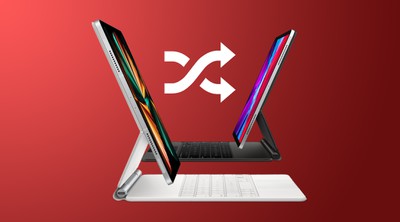 Now, however, reviews of the new M1-powered iPad have been published, revealing that the previous generation Magic Keyboard does actually work perfectly fine with the new 12.9-inch ‌iPad Pro‌. The Verge's Dieter Bohn says that when he tested it, he wasn't able to "discern any difference between the fit on the original and the new, white Magic Keyboard" and that it worked and closed just "fine."

Engadget's Chris Velazco says it fits "quite well," but notes that the experience using the new ‌iPad Pro‌ with the older Magic Keyboard is "certainly not ideal," noting that the "keyboard layer presses into the display’s glass when closed, which means the fit could be affected by a screen protector." However, despite the annoyance, Velazco doesn't believe that customers will need to "rush out and buy a new Magic Keyboard if you already own one."

In his review of the new 12.9-inch iPad Pro, YouTuber Marques Brownlee also notes that the new iPad works "perfect" with last year's Magic Keyboard but that it might feel a little snug when closed.

It's worth mentioning for customers of the $400 Kensington StudioDock, the new ‌iPad Pro‌ won't fit inside of the dock due to the 0.55mm increase in thickness, as noted by Jason Cipriani and CNET's Scott Stein.

Despite a marginal increase to compensate for the increased thickness of the ‌iPad Pro‌, the new Magic Keyboard offers the same floating design as the previous generation, but now it is also offered in a new white version. The keyboard is available in white for both the 11-inch and 12.9-inch ‌iPad Pro‌ for $299 and $349.

It does work for another year or so. Nobody is forcing anyone to buy a new ipad.

We all know when Apple releases a new product the current one stops working immediately and they send mysterious men to your house to march you to an Apple store to buy a new one. It’s known.
Score: 17 Votes (Like | Disagree)

Or you know, Apple could’ve just made a $350 dollar product work for another year or so, so you could get the best experience.

It does work for another year or so. Nobody is forcing anyone to buy a new ipad.
Score: 12 Votes (Like | Disagree)

Somebody needs to find out why we have such things as adverbs.

Or you know, Apple could’ve just made a $350 dollar product work for another year or so, so you could get the best experience.

I'd rather Apple not hold back on innovation so the device can fit in a case from a previous year, but that's just me.
Score: 8 Votes (Like | Disagree)

Really if you are a previous gen IPP user with MK, you’d be best off to sell/recycle the precious gen IPP and MK together and obtain the newest version of both to have the best experience.

Losing around $200 on the sale/purchase doesn’t seem worth it to “have the best experience.”
Score: 6 Votes (Like | Disagree)
Read All Comments