Just three days before the new iPad Pro begins arriving to customers, the developers of award-winning iPhone camera app Halide have announced the release of an iPad app, complete with a custom user interface that takes advantage of the larger screen. 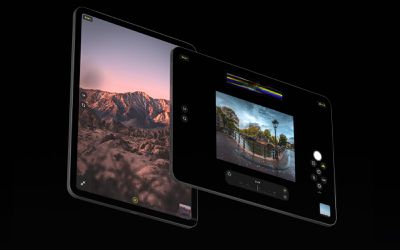 To keep the viewfinder minimally obscured, the iPad app has an expandable "honeycomb" of controls next to the shutter button for manually adjusting shutter speed, ISO, white balance, and more. Other key features are readily reachable at the edges of the screen, with Halide offering Smart RAW and RAW+JPEG capture, instant RAW processing, a dedicated Depth mode, manual focus with focus peaking, and more.

Unique to the iPad is a new Pro View that shrinks the viewfinder to be within the limits of your central vision, according to Halide:

Ever notice that taking a photo on an iPad is a challenge? It’s not just the iPad part. Our human vision is split into central and peripheral vision - allowing you to see detail only in a small area. As you hold iPads closer to you than iPhones and their screens are larger, it is nearly impossible to see your entire composition well. […]

Pro View is a toggle in the bottom left that shrinks the viewfinder up to the limits of your detailed central vision. It makes it large enough to use a large iPad screen, but small enough to judge composition and take a good photo. This also creates extra space for manual mode, a big histogram (we made it much larger), waveform, manual focus, and the pro features. Even enabling manual controls for shutter and ISO do not interfere or overlap on the viewfinder.

Halide said there are several other new features, refinements, and bug fixes, including a left-handed user interface option and a space gray app icon option.


Existing users can update the Halide app to automatically get access to the iPad app at no additional cost. New users can subscribe to the app for $1.99 per month or $11.99 per year or unlock the app for a one-time purchase of $39.99.

Halide is available on the App Store.

robotfist
No way am I subscribing to a camera app. I'm so tired of every piece of software being on a lease. The apps that get my money are paid apps, where I buy the product and then I own it.
Score: 23 Votes (Like | Disagree)

mactactic
Tired of the subscription model all these apps have now.
I see that I pass on the app.
Score: 19 Votes (Like | Disagree)

No way am I subscribing to a camera app. I'm so tired of every piece of software being on a lease. The apps that get my money are paid apps, where I buy the product and then I own it.

Totally agree, but to be fair, they offer a version you can purchase outright.

Some people might then argue about the price point of purchasing this particular app, but at least it's better than some developers who don't offer a purchase option at all.
Score: 8 Votes (Like | Disagree)

Apple_Robert
Good on Halide for bringing their magic to the iPad. I am glad I already have the app. Granted, I don't use my iPad for outside shooting very much but, I am glad Halide is looking out for iPad users.
Score: 6 Votes (Like | Disagree)

BornAgainMac
I don't know what problem they are trying to solve for $11.99 a year. Just going to use the camera app on the iPad to take pictures of the sky for free.
Score: 5 Votes (Like | Disagree)

great app ... but iPad? I can see iPad being used indoors, studio work and such but people dragging their iPads out to take photos? yes, they do that and it always makes me shake my head ...

Exactly...so theres nothing wrong with them brining one of the best third party apps to iPad. Until now there was really not a stellar third party app that shot RAW on iPad.
Score: 3 Votes (Like | Disagree)
Read All Comments