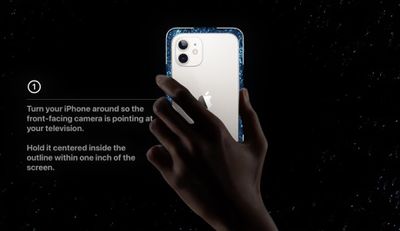 Professional television calibrator Vincent Teoh, who runs the YouTube channel HDTVTest, put the ‌Apple TV‌'s color calibration feature to the test on a range of popular TVs in a recent video.

The ‌Apple TV‌'s Color Calibration debuted in tvOS 14.5 and iOS 14.5, giving users the ability to hold an iPhone with Face ID near their TV and, after tapping a notification, the ‌iPhone‌'s front-facing camera and ambient light sensor will begin color measurements and automatically tailor the ‌Apple TV‌'s video output to deliver supposedly more accurate colors and improved contrast. Apple says this process will result in improved picture quality without adjusting the TV's settings.

Apple's demonstration image showing what the Color Balance feature can achieve.
Teoh found that in a number of cases Apple's calibration feature actually made color accuracy worse, even going as far as to incorrectly shift the color output of a high-end Sony mastering monitor.

When the tests were re-run with the TV's default color presets, the ‌Apple TV‌'s calibration feature improved color accuracy on all three models. Even so, Teoh found that when color accuracy was improved, image quality was degraded in other ways. Since the ‌Apple TV‌ had to shift the color output so much in these instances, the resulting image suffered from unwanted color banding lines, known as posterization.

Teoh's tests indicate that the ‌Apple TV‌'s color calibration is certainly not a replacement for professional color calibration using specialized tools, and should be used with caution. AFTVnews suggests that users may be better off using the Color Balance feature to see how drastically it changes the TV's image, and then attempting to match the result using the TV's built-in color options.

Just to be clear his job is to professionally calibrate displays for money. I’m not saying he’s wrong just an important consideration.

It's not really a consideration at all. Anyone who is familiar with Vincent knows the integrity of his analysis. Vincent, with a razor sharp dry wit and copious double entendre, tells it like it is. He praises and criticizes with equal fervor. Well, as with as much fervor as his deadpan delivery will allow. Dude is well worth the sub for anyone looking for straight-shooting TV analysis.
Score: 25 Votes (Like | Disagree)

twennywonn
Just to be clear his job is to professionally calibrate displays for money. I’m not saying he’s wrong just an important consideration.
Score: 18 Votes (Like | Disagree)

Maclver
Good thing Apple didn't say 100% of the TVs it's used on would show improvement... I feel that is why Apple gives you a comparison on your TV so you can make the decision for yourself.
Score: 16 Votes (Like | Disagree)

StrongArmmed
FTA: "When the tests were re-run with the TV's default color presets, the Apple TV's calibration feature improved color accuracy on all three models."

Wellll....the on-screen directions accompanying the feature advise that you should measure your TV in its base, default configuration. So, if one follows that simple yet important direction, there's a good chance that the color accuracy of your display will be improved.

Knew it. A gimmicky, flawed feature.

it cant be so ! people said blindly with total conviction it would put professional calibrators out of work and render tv picture settings menus futile
Score: 12 Votes (Like | Disagree)

Thursday December 23, 2021 7:45 am PST by Hartley Charlton
While Apple's color options have been a source of considerable discussion in recent years, complaints about the company's color offerings started to gain traction following the launch of the iPhone 13 and the aluminum Apple Watch Series 7, which are not available in Space Gray or Silver. With 2021 drawing to a close, we have examined Apple's entire selection of colors across its devices to take a ...
Read Full Article

Apple TV Just Got More Screen Savers, Here's How to Get Them on Your Mac

Wednesday December 15, 2021 5:25 am PST by Tim Hardwick
With the release of tvOS 15.2 earlier this week, Apple added nine new high-resolution screen savers to Apple TV HD and Apple TV 4K, including three featuring Scotland's Isle of Skye and Loch Moidart, and six offering various views of Iceland's stunning landscapes. Traveling along the coast of the Isle of Skye, Scotland Apple TV downloads new screen savers on a regular basis depending on your...
Read Full Article • 31 comments