Spotify has announced the availability of podcast timestamp sharing, a new feature of its mobile app that lets users share podcasts beginning at a particular moment. 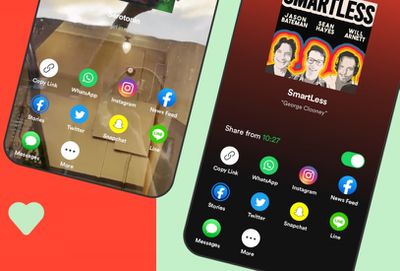 Previously, it was only possible to share a podcast link to an entire episode on Spotify. Timestamp sharing means the shared podcast will play for the recipient from the time that the sender chooses, allowing them to highlight specific content.

To share a timestamp, users can tap the Share button while listening to an episode, use the "switch to share" feature at the current playtime, and then select how they want to share the content. Tapping the shared link jumps to the chosen playtime.

In another development, Spotify is unveiling an updated sharing menu in its mobile app, including a way to preview what's being shared, and an improved destination list based on the social apps the user has installed. The changes are linked to Spotify's decision to bring its Canvas feature to Snapchat.

Previously limited to sharing on Instagram Stories, Canvas turns static song pages in Spotify into video-art showcases with the help of eight-second visual loops. By previewing a Canvas being shared on Instagram or Snapchat, users will be able to see ahead of time how it will look on their social channel.

Late last month, Spotify announced a new paid subscription platform for podcasts that allows podcasters to mark episodes as "subscriber only" without taking revenue from their paid-for content. Spotify unveiled the platform just a week after Apple announced its own upcoming podcast subscription service, for which Apple will collect 30% of podcast subscription fees that creators generate in their first year.

matthewadams
Watch Support, Homepod Mini support.. I can think of 90 other things more valuable than this.
But I guess you can't make a good anti-trust case if you adopt these things ?
Score: 3 Votes (Like | Disagree)

Literally just have the app on my phone for Rogan at this point. It's super unfortunate that I have to have a separate app just to watch one of my favorite podcasts. But I guess these are the times we live in now...

If you want to get rid of Spotify, you could just add this RSS feed ('https://spotifeed.timdorr.com/4rOoJ6Egrf8K2IrywzwOMk') to Overcast, PocketCasts or any non-broken podcast app of your choice. No ads. ?

If you want to get rid of Spotify, you could just add this RSS feed ('https://spotifeed.timdorr.com/4rOoJ6Egrf8K2IrywzwOMk') to Overcast, PocketCasts or any non-broken podcast app of your choice. No ads. ?

What a game changer that site is!

What a game changer that site is!

Nice one for this!

DataChris
Since most Spotify users do NOT want podcasts in their feeds ('https://community.spotify.com/t5/Live-Ideas/All-Platforms-Podcasts-Option-to-disable-or-hide-podcasts/idi-p/4812243') at all (we're there for the music), more podcasts features are more reasons to avoid Spotify!!
Score: 1 Votes (Like | Disagree)
Read All Comments

Friday April 2, 2021 10:08 am PDT by Juli Clover
Since 2019, Spotify has been working on "Car Thing," a voice-controlled music and podcast assistant. After Spotify announced Car Thing, little else was said about it, but it appears the company is gearing up for some kind of launch. Back in January, Car Thing showed up in FCC filings, and now, images of Car Thing have been located in the Spotify app code. MacRumors contributor Steve Moser...
Read Full Article • 34 comments

Wednesday June 2, 2021 8:41 am PDT by Mitchel Broussard
Spotify today announced a new collaborative playlist and a collection of new stat tracking features for users. The company is referring to the stat tracking updates, called "Only You," as a way to see your Spotify Wrapped stats earlier in the year. In total, there are six new ways to break down your Spotify listening history, including finding out which artist most aligns with your...
Read Full Article • 17 comments

Friday January 15, 2021 9:41 am PST by Juli Clover
Apple is considering launching a new subscription service that would be focused on podcasts, according to unnamed sources that spoke to The Information. The service would charge people to listen to podcasts. By creating a paid podcasting service, Apple could potentially lure podcast creators with the promise of more money, stealing them away from other platforms like Spotify, SiriusXM, and...
Read Full Article • 74 comments