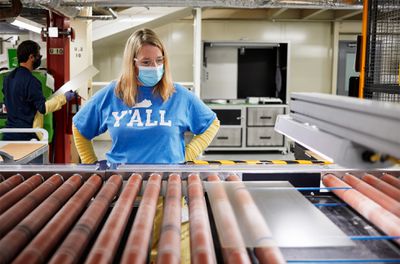 The combined $495 million investment will support Corning's ongoing research and development into "state-of-the-art glass processes, which led to the creation of Ceramic Shield, a new material that is tougher than any smartphone glass."

"Apple and Corning have a long history of working together to accomplish the impossible," said Jeff Williams, Apple's chief operating officer. "From the very first iPhone glass, to the revolutionary Ceramic Shield on the iPhone 12 lineup, our collaboration has changed the landscape of smartphone cover design and durability. Ceramic Shield is a prime example of the technologies that are possible when deep innovation meets the power of American manufacturing. We're so proud to work alongside Corning, whose 170-year-old legacy is a testament to the ingenuity of the US workforce."

With support from Apple's Advanced Manufacturing Fund, experts at both companies worked together to develop a new glass-ceramic, which gets its strength from nano-ceramic crystals, produced in Corning’s plant in Harrodsburg, Kentucky, the facility where every generation of ‌iPhone‌ glass has been made.

The new material was enabled by a high-temperature crystallization step which forms nano-crystals within the glass matrix. Those specialized crystals are kept small enough that the material is transparent. The resulting material makes up the revolutionary Ceramic Shield, which Apple used to fashion the new front cover featured on iPhone in the iPhone 12 lineup. Prior to Ceramic Shield, embedded crystals have traditionally affected the material's transparency, a crucial factor for the front cover of iPhone because so many features, including the display, the camera, and sensors for Face ID, need optical clarity to function.

Established in 2017, Apple's Advanced Manufacturing Fund was designed to "foster and support the innovative production and high-skill jobs that will help fuel a new era of technology-driven manufacturing" in the United States, according to Apple.

Awards from the $5 billion fund have led to breakthrough innovations, from supporting the development of advanced laser technology in Texas, to accelerating the supply of Covid-19 sample collection kits for US hospitals, and more.

ilikewhey
this is good, the more jobs we can keep on the state side and the less outsourcing the better, if only we have a reliable finfet foundry so apple doesn't have to rely on foreign foundries for their most crucial components
Score: 5 Votes (Like | Disagree)

matrix07
A week ago I just dropped my iPhone X (and not only dropped. I hit a mosquito on my hand that holding the phone and my phone flied across me and landed face down on stone pathway with a “bang” sound). My heart stopped. Thought screen would be shattered. Luckily apart from a few scratches on stainless steel rim everything is fine ?.
Needless to say my trust in this company is immense.
Score: 4 Votes (Like | Disagree)

yet having never dropped my phone or had it near keys/coins it developed scratches, how is this possible from just taking it out of pockets?


Can anyone confirm that Ceramic Shield is really different and doesn’t scratch from clothes fibres?

There can be small grains of sand in your pockets, just by inserting things there before. When you move around, the phone is moving slightly also in the pocket and can rub agains a grain of sand or other hard surfaces.
But why are you bothered from a device showing usage. Do you expect your car to be scratch-free even if you didn't have any accidents. I think the scratches show much you use the phone and just embrace them.
Score: 4 Votes (Like | Disagree)

NoSoup4U
Is it too late to get the formula for transparent Aluminum from Scotty?
Score: 3 Votes (Like | Disagree)

A week ago I just dropped my iPhone X (and not only dropped. I hit a mosquito on my hand that holding the phone and my phone flied across me and landed face down on stone pathway with a “bang” sound). My heart stopped. Thought screen would be shattered. Luckily apart from a few scratches on stainless steel rim everything is fine ?.
Needless to say my trust in this company is immense.

Reminds me of this ('//www.youtube.com/watch?v=2PochL9uL-Y').
Score: 2 Votes (Like | Disagree)
Read All Comments

Monday February 22, 2021 3:01 am PST by Sami Fathi
Apple's $10 million donation to COPAN Diagnostics from its Advanced Manufacturing Fund led to more than 15 million COVID-19 tests being shipped across the United States, according to an Apple press release. Apple's chief operating officer, Jeff Williams, said the company is proud of its continued funding to support frontline healthcare workers who are battling the pandemic across the...
Read Full Article • 28 comments

Wednesday April 21, 2021 8:53 am PDT by Mitchel Broussard
Apple today announced that the critically acclaimed film "CODA" is set to launch on Apple TV+ and in theaters on Friday, August 13. The film tells the story of a seventeen-year-old girl named Ruby (played by Emilia Jones), who is the sole hearing member of a deaf family, nicknamed "CODA," or "child of deaf adults." Ruby's life centers around balancing responsibilities as an interpreter...
Read Full Article • 10 comments

Friday April 16, 2021 11:01 am PDT by Juli Clover
For this week's giveaway, we've teamed up with Activity Awards, a fun company that creates magnets designed to look like the awards that you receive for reaching Apple Watch fitness goals. Priced from $8.99 to $12.99, each magnet is modeled after a different award, with a wide range of options available. There are awards for meeting goals like the seven-day move, exercise, and stand...
Read Full Article • 29 comments