iFixit has shared the first of its two-part series in tearing down Apple's AirTag item tracker, revealing that Apple had to make impressive design decisions to achieve its small design, including rethinking the speaker layout. 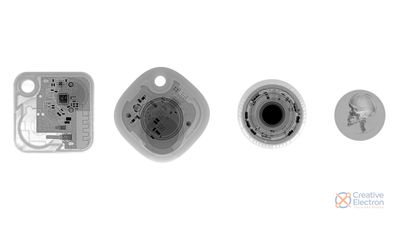 For comparison, iFixit compared Apple's AirTag to the Tile Mate and the Samsung Galaxy SmartTag. Compared to the competition, AirTag is the smallest in size, with the most internal space used to house the battery itself. One notable design difference is AirTag's lack of a built-in keyring hole, which iFixit attributes to Apple's history of "turning essential functions into premium, add-on accessories."

An x-ray of the three devices does indeed show that Apple wasted no internal space for its item tracker. On the other hand, the Tile Mate and Galaxy SmartTag seem to be "sprawling" with internal space, and despite their larger footprints, neither tracker includes ultra-wideband technology like AirTags. It is worth noting that Samsung recently launched an ultra-wideband variant of the Galaxy SmartTag; however, iFixit was unable to obtain one for its comparison.

The Tile Mate, Galaxy SmartTag, and AirTag all feature coin cell replaceable batteries. AirTag and the Galaxy SmartTag use a .66Wh CR2032 battery, while the Tile Mate uses a smaller .39Wh CR1632 battery. AirTag features a twist and lift mechanism for its backplate in terms of battery replacement, but it doesn't include an easy way to lift the backplate if you happen to have greasy or slippery hands.

All three trackers open up with finger power—no other tools required! That said, the AirTag is by far the most difficult, especially if you indulged in a snack earlier and have greasy digits. Imagine opening a stubborn pickle jar with just two slippery thumbs, and you’ve got the idea. The other trackers have dedicated divots for separating the pieces with a fingernail—moisturize to your heart’s content!

Replacing the battery is the furthest an average customer will be able to get into their AirTag without proper tooling. Even in that case, iFixit says Apple showed "surprising restraint in sealing the AirTag," noting that completely opening the tracker only requires a vise and some plastic sticks.

AirTag features a built-in speaker which emits sounds when pinged by a paired iPhone through the Find My app, during set-up and other situations. However, given its small form factor, Apple had to think of a new way to fit a speaker into the tracker. With AirTag, Apple decided to use the entire body as the speaker driver, with the underside of the cover serving as the speaker's magnet.

It’s circles all the way down as you head inside the AirTag. Did you notice the “button” on the underside of the cover? That’s not a clickable button, like the Mate and SmartTag have, but rather the magnet we saw earlier in the X-ray. It sits right inside the donut-shaped logic board, nested into a coil of copper to form a speaker. You read that right—the AirTag’s body is essentially a speaker driver. Power is sent to the voice coil, which drives the magnet mounted to the diaphragm—in this case, the plastic cover where the battery lives—which makes the sounds that lead you to your lost luggage.

As we noted earlier this week, it is possible to drill a hole through an AirTag to make up for its lack of a built-in keyring hole. Doing so will certainly void your AirTag's warranty, and while it is possible, it is a risk. As iFixit notes, "drilling in the wrong place can cause serious damage."

iFixit says that the second part of its teardown will include detailed information on the AirTag's circuit board and other hidden secrets. For everything you need to know about ‌AirTags‌, be sure to check out our guide.

justperry
I like what they did to the coin. ;)

iLoveDeveloping
What a beautiful design. Everything in a circle like it should be. I studied industrial design and as always apple create art, they are incredible at going the extra mile to make it look gorgeous inside and out! Something they got from Steve and Johnny! It actually looks a bit like Apple Park in there! ?
Score: 44 Votes (Like | Disagree)

dvanwinkle
That X-ray of the quarter ? ?
Score: 42 Votes (Like | Disagree)

Seeing that x-ray, Jefferson was in dire need of a dentist.

Washington is on the quarter, not Jefferson.

What a beautiful design. Everything in a circle like it should be. I studied industrial design and as always apple create art, they are incredible at going the extra mile to make it look gorgeous inside and out! Something they got from Steve and Johnny! It actually looks a bit like Apple Park in there! ?

It's sad to me how underrated Apple's design and engineering are. The company is constantly criticized for "costs more, does less" and "overpriced" and "outdated." But looking at the x-rays comparing the different tracking devices, it's immediately obvious how much more thought went into designing AirTags than the products that came before it. The other two look pedestrian, and the internal components are just placed wherever. In the AirTag, the layout of everything inside has been deliberately placed so that no space is wasted, and there's a beautiful symmetry to everything.
Score: 33 Votes (Like | Disagree)

LordVic
I want a wallet version for sure.
Score: 19 Votes (Like | Disagree)
Read All Comments

Saturday February 4, 2023 10:05 am PST by Eric Slivka
Online retailer TigerDirect has slashed pricing on the M1 iPad Air in several colors, offering the base 64GB configuration for just $313.99 in Purple and Pink. Note: MacRumors is an affiliate partner with TigerDirect. When you click a link and make a purchase, we may receive a small payment, which helps us keep the site running. That's a savings of 48% compared to Apple's normal $599.00...
Read Full Article • 357 comments

Sunday February 5, 2023 6:07 am PST by Joe Rossignol
Apple has discussed selling a new top-of-the-line iPhone alongside the Pro and Pro Max models in 2024 at the earliest, according to Bloomberg's Mark Gurman. Based on this timeframe, the device would be part of the iPhone 16 lineup or later. In a September 2022 edition of his weekly "Power On" newsletter, Gurman said there was "potential" for an iPhone 15 Ultra to replace the iPhone 15 Pro...
Read Full Article • 309 comments