With the launch of iOS 14.5 and watchOS 7.4, Apple introduced a feature that's designed to allow people wearing masks to unlock their iPhones with a paired and authenticated Apple Watch, alleviating the need to continually enter a passcode. 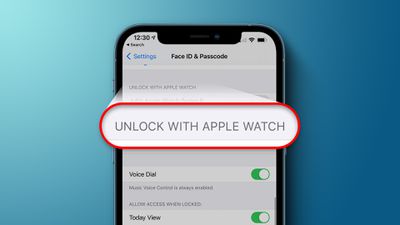 Apple has published a support document outlining how the feature works and the requirements that enable it to function. Apple says that the Apple Watch unlocking process is not using Face ID to recognize and authenticate you, so the same facial scan that allows ‌Face ID‌ to unlock your phone isn't happening here.

There are a specific set of requirements that allow the Apple Watch to authenticate your identity for unlocking an iPhone. You'll need an ‌iPhone‌ X or later with iOS 14.5 or later and an Apple Watch Series 3 or later with watchOS 7.4 or later, which must be paired together.

For the Apple Watch to authenticate your identity the watch needs to be on your wrist and unlocked, and you need to be wearing a mask that covers both the mouth and the nose, presumably to signal to the ‌iPhone‌ to use the secondary unlocking method rather than ‌Face ID‌.

To unlock the ‌iPhone‌ with the Apple Watch, you need to wake your ‌iPhone‌ by raising it or tapping the screen, and then glance at it to unlock. The requirement to glance at the ‌iPhone‌ is meant to prevent the feature from working when you're not close by your ‌iPhone‌, and though not mentioned by Apple, there definitely seems to also be a proximity requirement because it will tell you if you're not close enough to your phone.

This is a feature that can allow someone else that's not you to unlock your ‌iPhone‌ if they're near you, have your ‌iPhone‌, and are wearing a mask, so enabling it should be done with caution if other people have access to your device and you're worried about security.

It's worth noting that Unlock with Apple Watch only works for unlocking the ‌iPhone‌. It does not verify identity for use with Apple Pay, passwords in Keychain, or password-protected apps, which will require either ‌Face ID‌ or your passcode.

Though not as secure as ‌Face ID‌, Unlock with Apple Watch is a convenient option for those who are tired of having to enter a passcode on their devices while wearing a mask.

alexandr
the watch gives you a haptic when your phone is unlocked this way and gives you the ability to lock it back up, so i don't think security is that much of an issue.
Score: 18 Votes (Like | Disagree)

Honestly, the ONLY reason I needed to unlock my phone with a mask on is to use the Face ID on phone for Apple Pay to pay for something when I was in an establishment and had to wear a mask.

aside from this it’s kinda useless

If you already have an Apple Watch and it’s with you at the grocery store while wearing a mask, why not just use the Apple Pay on your Watch…? I don’t get what the problem is with all of these people crying that it doesn’t work with Apple Pay. You have Apple Pay setup on your phone, but not your watch? What is the logic behind that? The security risk of authenticating Apple Pay on the phone this way is far greater than whatever “inconvenience” you people might be feeling. Setup Apple Pay on your Watch! That’s what it’s there for! Double clicking the side button is much faster than pulling out the phone anyway.
Score: 16 Votes (Like | Disagree)

LeadingHeat
It seems to work flawlessly for me so far! Glad that it’s opt-in, that increases the security of it greatly. It seems to recognize anyone wearing a mask, not just you. (If someone tries to unlock your phone it will, if you have this feature enabled.) You get a haptic feedback tap from your watch, and there’s an option to quickly lock your iPhone again if if wasn’t you. (It then requires the iPhone’s passcode to unlock it after that, Apple Watch unlocking is disabled until the phone is unlocked again).

Overall very well thought through! I’m happy with it and it’s a welcome addition to this crazy time we live in.
Score: 7 Votes (Like | Disagree)

Why not just make it happen like with the Mac . Why only iPhones with Face ID and mask on? So stupid

Do you carry your Mac in your pocket?
Score: 5 Votes (Like | Disagree)

I absolutely love this feature already.

Same here. Wish we had it a year ago - and now that we do, boy do I wish we soon won't need it anymore.
Score: 5 Votes (Like | Disagree)
Read All Comments

Monday July 19, 2021 9:36 pm PDT by Eric Slivka
Following the release of iOS 14.7, watchOS 7.6, and several other operating system updates this week, Apple has acknowledged that a bug in iOS 14.7 could prevent users from being able to unlock their Apple Watches by simply unlocking their paired Touch ID-equipped iPhones. Apple's temporary workaround for the bug is for the user to type their passcode into their Apple Watch to unlock it...
Read Full Article • 63 comments

Wednesday April 21, 2021 4:12 am PDT by Tim Hardwick
Apple on Tuesday seeded the release candidate of an upcoming watchOS 7.4 update to developers for testing purposes, and in the process revealed that the Apple Watch ECG feature is coming to additional countries very soon. Along with iOS 14.5 and iPadOS 14.5, the official public version of watchOS 7.4 is set to be released next week, and Apple Watch users who install it in Australia and...
Read Full Article • 13 comments

Monday February 7, 2022 4:07 am PST by Tim Hardwick
Apple's first Mac with Face ID is unlikely to be a MacBook because the technology necessary to embed the authentication hardware into a thin notebook display still doesn't exist, according to well-connected Bloomberg journalist Mark Gurman. Gurman's latest thoughts on the subject appeared in the Q&A section of his latest "Power On" newsletter. On whether Face ID will ever come to the Mac,...
Read Full Article • 277 comments

Friday August 12, 2022 12:46 pm PDT by Juli Clover
Samsung this week launched its fourth-generation foldable devices, the $1,000 Galaxy Z Flip and the $1,800 Galaxy Z Fold. Though there's no sign of a comparable Apple foldable device on the horizon, rumors suggest prototypes are in the works, so we thought we'd take a look at Samsung's newest smartphones to see what Apple needs to measure up to when a foldable iPhone does come out. Subscribe ...
Read Full Article • 274 comments