Apple today released tvOS 14.5, the fifth update to the tvOS 14 operating system that was released in September 2020. tvOS 14.5 comes three months after the release of tvOS 14.4. 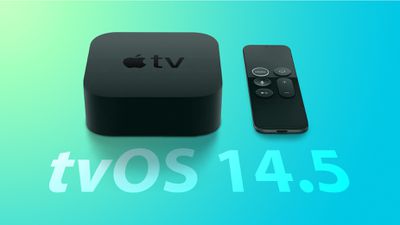 tvOS 14.5, which is a free update, can be downloaded over the air through the Settings app on the Apple TV by going to System > Software Update. ‌Apple TV‌ owners who have automatic software updates enabled will be upgraded to tvOS 14.5 automatically.

With the introduction of the second-generation ‌Apple TV‌ 4K, Apple announced a new Color Balance feature, which also happens to be available for existing ‌Apple TV‌ 4K and ‌Apple TV‌ HD models. Available by opening up the Settings app on ‌Apple TV‌, selecting Video and Audio, and clicking on "Color Balance" in the Calibration section, the new feature uses the iPhone's front facing camera to match the color shown on the ‌Apple TV‌ with industry standard specifications used by cinematographers.

With this data, ‌Apple TV‌ tailors video output to deliver more accurate colors and improved contrast with no need to adjust television settings. Color balance is available on all ‌Apple TV‌ models that run tvOS, and it can be used with tvOS 14.5 and iOS 14.5. Note that it does not work when Dolby Vision is enabled, and an ‌iPhone‌ with Face ID is required.

The tvOS 14.5 update adds support for the latest PlayStation 5 DualSense and Xbox Series X controllers, which can be used to play games from the tvOS App Store and Apple Arcade.

Other new features include frame rate options of 29.97Hz and 59.94Hz instead of 30Hz/60Hz, an optional "Type to Siri" Accessibility feature that can be enabled, which mirrors the Type to ‌Siri‌ feature on iOS devices, a new option for choosing "Other Wireless Speakers" as the Default Audio Output, and tweaks to the Podcasts app to bring it in line with the changes introduced in iOS 14.5.

The release of tvOS will see Apple begin enforcing its new App Tracking Transparency rules, with developers now required to ask for and receive a user's permission to access their random advertising identifier (known as the IDFA) to track user activity across apps and websites for ad customization purposes.

Going forward, when an app wants to access a person's advertising identifier on tvOS, users will have a prompt with options to "Allow Tracking" or "Ask App Not to Track." Selecting "Ask App Not to Track" will prevent the app's developer from accessing the user's IDFA, and developers will also have to respect the user's tracking preference and refrain from using other invasive cross-app tracking methods.

With the update, customers in Austria, Ireland and New Zealand will also be able to use the ‌Siri‌ remote with their voice thanks to expanded access.

Update.
I tried it and it made the colors a bit warmer.
Score: 9 Votes (Like | Disagree)

That's because it already has a color graded Dolby Vision profile.

This is only true if you run the home screen in 4k dolby and if you do just stop.
Score: 3 Votes (Like | Disagree)

I'm going to trust Doby and Sony and their ability to properly work with the software on the Apple TV to calibrate, rather than a nice parlor trick Apple created. I've tried the Apple solution and it's not great. Better than nothing but that's about it.

You should only be running DV when you’re watching content that is actually DV. Anything else is just the ATV doing it’s own conversion to DV with likely inaccurate results. That’s why you set the ATV to “match content” so it’s not doing fake HDR and allow it to set the appropriate dynamic range for the source material. Folks with DV on all the time should stop doing that (if they want a good, accurate picture) and run the new color balance feature in an SDR mode.
Score: 2 Votes (Like | Disagree)

I've got 4k Doby Vision, so it's not needed (nor is it an option).
Score: 2 Votes (Like | Disagree)
Read All Comments