Apple yesterday announced a completely redesigned 24-inch iMac with the M1 Apple silicon chip. The new iMac, the first major redesign of the Mac desktop computer since 2012, has several changes compared to the previous generation. 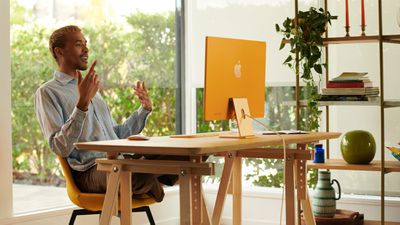 In the aftermath of the event, a few new features and tidbits may have slipped under the radar, so we’ve compiled this list of some of the less-talked-about features and changes of the new 24-inch ‌iMac‌.

The 24-inch ‌iMac‌ is the first Mac to feature built-in Spatial Audio with Dolby Atmos. This is enabled by six brand new high-fidelity speakers that work in junction with force-canceling woofers. Apple says in tandem, the new speakers and woofers create "the best speakers in any Mac." Spatial Audio is available on compatible iPhone and iPad devices with Dolby Atmos content, and now it's coming to the Mac for the first time.

The ‌M1‌ Apple silicon MacBook Air, MacBook Pro, and Mac mini released in November were the first Macs to support the new and faster WiFi 6 protocol. With ‌M1‌ now on the ‌iMac‌, the 24-inch ‌iMac‌ becomes the first Mac desktop computer to support WiFi 6.

Headphone Jack on The Side

Previous generation ‌iMac‌ models featured an SD card slot reader on the rear. The new design of the 24-inch ‌iMac‌ made this a challenge. In theory, Apple could have easily placed the SD card reader on the side, like the headphone jack, but instead, it instead decided to remove it entirely.

Of course, these are just a few of the many new features coming with the 24-inch ‌iMac‌. You can learn more about the new ‌iMac‌ and everything else Apple announced at its "Spring Loaded" event using our roundup.

APassenger
Removing the SD slot is not a "feature."
Score: 70 Votes (Like | Disagree)

yesjam
If there were a logo on the chin and black bezels, I imagine the number of complaints about the design would be cut by ~60-70%.
Score: 32 Votes (Like | Disagree)

Spock
Buy a Mac mini then take the $700 you saved and buy a nice display, keyboard and mouse. Or, buy a new Mac mini, hook it up to whatever you have laying around the house, spend an extra $99 and get an M1 powered iPad Pro and get two devices for just about the price of one base model iMac.
Score: 31 Votes (Like | Disagree)

This is a very disappointing decision. SD cards are at least a decade or two from becoming obsolete.
Pros use them all the time. Guess it's gonna be a dongle for them now.
Score: 24 Votes (Like | Disagree)

The design decisions confuse me. Why make it so thin that you have to plug in speakers/headphones on the side, so it sticks out, and then boast about how they've reduced the number of cables/clutter by plugging the ethernet in the power supply?

well,
1. you can use that headphone jack without fumbling, pulling your imac away from the wall to find the damn location
2. enet is 99.9% on floor. Seems pretty good idea. It also means that Enet and power break away with magsafe, so there are NO floor cables attached that can pull it off the table.
Score: 23 Votes (Like | Disagree)
Read All Comments

Friday March 11, 2022 2:38 pm PST by Juli Clover
Apple has no plans to release a larger-screened iMac, according to a new report from 9to5Mac. Citing unspecified sources with knowledge of Apple's product pipeline, the site says that Apple will not be introducing a bigger iMac "in the near future." With the launch of the Mac Studio, Apple discontinued the Intel-based 27-inch iMac, creating some confusion about the future of the iMac line....
Read Full Article • 682 comments