Apple today released a series of updates aimed at app developers, letting them know about upcoming requirements related to iOS 14.5, the newest version of iOS 14 that's set to be released next week. 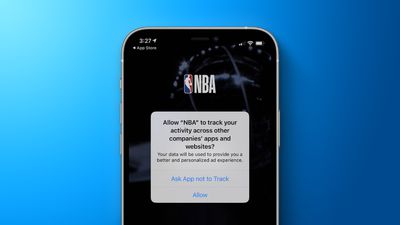 Starting on Monday, April 26, all iPhone, iPad, and Apple Watch apps submitted to the App Store must be built on the Xcode 12 and iOS 14 SDK or later, which means that new apps will no longer be able to use older SDK options.

With the launch of iOS 14.5, Apple is requiring all developers to adhere to its App Tracking Transparency rules that will require them to get express permission to track users across apps with the iPhone's advertising identifier.

Apple says that apps must start using the AppTrackingTransparency framework on Monday, April 26, 2021.

With the upcoming public release of iOS 14.5, iPadOS 14.5, and tvOS 14.5, all apps must use the AppTrackingTransparency framework to request the user's permission to track them or to access their device's advertising identifier. Unless you receive permission from the user to enable tracking, the device's advertising identifier value will be all zeros and you may not track them.

When submitting your app for review, any other form of tracking -- for example, by name or email address -- must be declared in the product page's App Store Privacy Information section and be performed only if permission is granted through AppTrackingTransparency. You'll also need to include a purpose string in the system prompt to explain why you'd like to track the user, per App Store Review Guideline 5.1.2(i). These requirements apply to all apps starting April 26, 2021.

The April 26, 2021 deadline suggests that iOS 14.5 will either be released on that date or the day after. Apple today released the iOS 14.5 release candidate in preparation for the launch, so the update is nearly ready to go.

I expect that we are going to see nearly every app start requiring you to have an account (and/or signing in) to use it... which is going to have worse "privacy" end result - you will be tracked at a "verified" account level (which adds more value to the tracked data) and this will be linked to your account across devices.

Worst case scenario, make a fake email address and use fake credentials. Not a good solution but better than making it easy for the scumbags.

Ex: I bought a Doom game on Steam, the maker, Bethesda, required an account to play the game, I promptly requested a refund from Steam and listed the need for an account as my reason for wanting the refund. If we all do this companies will change their ways.
Score: 3 Votes (Like | Disagree)

As a .NET engineer, I really wish Microsoft would push for the same level of expectations, but I know they won't. Windows users and software developers will whine about being forced into costly redesigns which will involve old software ceasing to work, and new software coming with a price tag to offset that cost. Simply look at the Microsoft Store to see the adoption rate isn't great.

But that also continues the age-long DLL hell and system slowdown-over-time that has plagued Windows forever. In this scenario, Microsoft can't seem to win. Hell, pouring through "current" MSDN APIs still show text like "This function kept for compatibility with 16-bit Windows applications"

Lazy software engineering is too common and too easy. At least iOS still has a chance to keep itself from spaghetti hell.
Score: 3 Votes (Like | Disagree)

Updates for old apps will require xcode 12, and it's about a big of a pain in the rear end as you'd expect. My employeer is dependent on a 3rd party SDK that only works with xcode 11. The update that works with xcode 12, removes other features. So we need to re-implement the removed features so that we can update to xcode 12...

Apple has given a warning about 14.5 to developers for a good while now. Developers need to get their proverbial ducks in a row before the deadline.
Score: 3 Votes (Like | Disagree)

cuz none of them have been using the new SDK yet
Score: 2 Votes (Like | Disagree)
Read All Comments

Apple Seeds First Betas of iOS 14.5 and iPadOS 14.5 to Developers With Anti-Tracking Requirement

Monday February 1, 2021 10:07 am PST by Juli Clover
Apple today seeded the first betas of new iOS and iPadOS 14.5 updates to developers for testing purposes, a week after releasing the iOS 14.4 update with bug fixes and feature updates. iOS and iPadOS 14.5 can be downloaded through the Apple Developer Center or over the air after the proper profile has been installed on an iPhone or iPad. iOS 14.5 is the update where Apple will begin...
Read Full Article • 26 comments