Samsung is not planning to include a ToF (time of flight) sensor in its upcoming Galaxy S22 flagship smartphone, according to Korea IT News, due to the South Korean tech-giant believing the technology lacks a "clear advantage" for the front-end consumer. 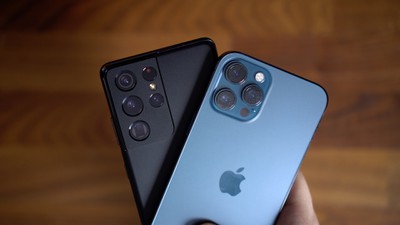 Apple first introduced ToF, or LiDAR, with the iPad Pro in 2020, and first on the iPhone with the iPhone 12 Pro and iPhone 12 Pro Max. LiDAR, in simple terms, measures the time light takes to reach a destination and back. Using that data, devices can map and create 3D spaces or objects.

Samsung included a ToF sensor in its Galaxy Note 20 that was released last year; however, Korea IT News notes that it "did not meet its expectations." Samsung believed that the new sensor and data would "boost effects of its smartphone cameras," but has ultimately decided that LiDAR lacks applications that "can induce" customers.

While Samsung decides not to include a LiDAR sensor in its upcoming flagship device, Apple is continuing to expand its adoption of the technology. Wedbush analysts believe that Apple will include LiDAR in all models of the iPhone 13 lineup, rather than just the Pro devices. Alongside being available on more devices, the sensor is expected to receive improvements in recognizing and detecting corners and edges as part of a new and improved camera system.

ckater
Funny. Apple is clearly hiding some of the purpose in the dark. So Samsung first copied, then realized it has no own plan für the use.
Let me predict: If Apple shows his cards, Samsung will re-add the sensor in no time.
Score: 23 Votes (Like | Disagree)

I agree, until a hypothetical apple glass. There is hardly a mainstream usage for lidar. Wait and see...

Do you use the camera of your phone? LiDAR is used by the Camera app all the time.
Score: 10 Votes (Like | Disagree)

Nozuka
Killer applications surely are missing at the moment.

Hopefully that will change though. Will be interesting to see what Apple has planned for it.... better not end up like 3D touch ;)
Score: 7 Votes (Like | Disagree)

chucker23n1
It's not clear to me if Apple is overestimating the usefulness of LiDAR, or if they know it isn't that useful yet but have another shoe (e.g. glasses) to drop.
Score: 7 Votes (Like | Disagree)

elvisimprsntr
Apple is building infrastructure for its vision for the future (AR/VR). Samsung clearly has no vision.
Score: 5 Votes (Like | Disagree)

thays133
I can not disagree with Samsung on the feature. As it stands there is very little good applications for it on a consumer level device. Pro level the cell phones Lidar is far from being good so same boat not a good use for it with a relatively expensive sensor.
Score: 4 Votes (Like | Disagree)
Read All Comments

Sunday December 13, 2020 5:42 am PST by Frank McShan
Samsung's Galaxy S21 smartphone lineup is set to be released in 2021, and a new video shared on YouTube compares an alleged Samsung Galaxy S21+ with an iPhone 12 Pro. The back of the iPhone 12 Pro features precision-milled matte glass, while the back of the alleged Galaxy S21+ seems to be constructed from a plastic-like material. Additionally, the three distinct cameras of the Galaxy S21+...
Read Full Article • 174 comments

Thursday May 27, 2021 7:22 am PDT by Joe Rossignol
While sensor-shift optical image stabilization is currently limited to the iPhone 12 Pro Max, the feature will be expanded to all iPhone 13 models later this year, according to Taiwanese supply chain publication DigiTimes. From the report, with emphasis added:The VCM makers mainly deliver shipments for Android handsets in the first half of the year, but such shipments are expected to be...
Read Full Article • 46 comments

Wednesday March 17, 2021 4:06 am PDT by Sami Fathi
Samsung is ringing the alarm bells, signaling that it may skip releasing a new Galaxy Note device this year due to the fallout from a global semiconductor shortage. As Bloomberg reports, Samsung's co-CEO Koh Dong-jin said during an annual shareholder meeting that there's a "serious imbalance in supply and demand of chips in the IT sector globally." Specifically, D J Koh said the Galaxy Note...
Read Full Article • 85 comments