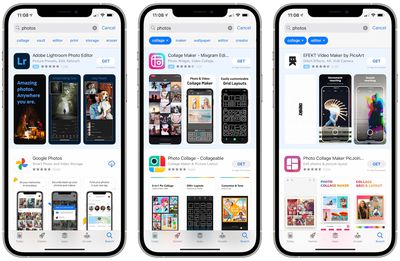 As noted in the MacRumors forums and on Twitter, some iPhone users in recent weeks have started to see tags in the App Store after searching for a popular term like "photos" or "wallpaper." After searching for "photos," for example, some of the tags that can be selected include "collage" or "editor" or "storage."

As of now, it appears that the tags are only visible to a small number of users. Many users that see the tags are running the iOS 14.5 beta, but a few have claimed to see them on iOS 14.4.2, so it is possible that the tags could be a server-side change that will eventually be expanded to more users on multiple iOS versions.

Apple's website says 70% of App Store visitors use search to find apps, so the search tags should benefit many users. In 2016, Apple introduced Search Ads, allowing developers to pay Apple to have their app listing shown at the top of the search results based on the app's relevance to the user's search query, among other factors.

alexandr
but are they air tags?..
Score: 8 Votes (Like | Disagree)

macduke
I think this deserves a finally. Such a simple thing to implement that has been needed since a few months after the App Store launched and began to explode with content. The obvious problem is people tagging the hell out of their apps. Hopefully there is a way to mitigate this by limiting the number something.
Score: 3 Votes (Like | Disagree)

duanepatrick
Same sentiment...Thought it was air tags for a sec :)
Score: 2 Votes (Like | Disagree)

You beat me to it ... This IS your AirTags, the Air is the App Store in the cloud with less letters

MacRumors is just trying to tell us something.

or are they?)
Score: 2 Votes (Like | Disagree)
Read All Comments

Thursday April 29, 2021 1:43 pm PDT by Juli Clover
Apple today announced that the App Store is now offering search suggestions, a new feature that's designed to make it easy to locate exactly what you're looking for when seeking out a new app or game. You'll see search suggestions when you start typing in a new search term. So, for example, if you type in "Game," you'll see specific categories you can add such as "puzzle," "multiplayer,"...
Read Full Article • 11 comments

Saturday May 21, 2022 9:00 am PDT by Hartley Charlton
With around four months to go before Apple is expected to unveil the iPhone 14 lineup, the overwhelming majority of rumors related to the new devices so far have focused on the iPhone 14 Pro, rather than the standard iPhone 14 – leading to questions about how different the iPhone 14 will actually be from its predecessor, the iPhone 13. The iPhone 14 Pro and iPhone 14 Pro Max are expected...
Read Full Article • 220 comments