Apple is working on a new version of the Apple TV that's set to be released at some point in 2021, and the new set-top box that's coming could feature support 4K 120Hz video output. 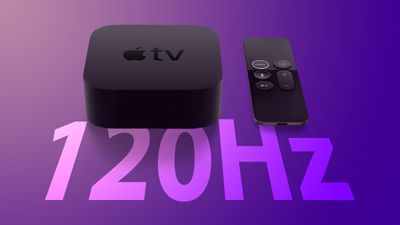 Evidence of 120Hz support was found in the tvOS 14.5 beta code by 9to5Mac, with the code listing multiple instances of "120Hz and "supports120Hz." The code was found in PineBoard, Apple's name for the ‌Apple TV‌ interface.

The references to 120Hz refresh rate support suggest that Apple is testing this feature for the next-generation ‌Apple TV‌, and it suggests that the new set-top box will use HDMI 2.1. HDMI 2.0, used for the current fifth-generation ‌Apple TV‌ 4K, is limited to 4K resolution at 60Hz. HDMI 2.1, however, is able to support streaming 4K content at 120Hz.

As with the 120Hz refresh rate on the iPad Pro models, a 120Hz refresh rate mode on ‌Apple TV‌ would allow for smoother performance on 120Hz television sets and would be ideal for gaming where there's a lot of quick action as you might find in shooting games.

There are 120Hz TVs on the market, which people generally buy for gaming purposes and use with the latest Xbox Series X and PlayStation 5 consoles, both of which support the HDMI 2.1 specification and can output 4K video at 120Hz.

We don't yet know when the next-generation ‌Apple TV‌ will launch, but rumors have suggested it will feature a faster processor and a redesigned remote. Some rumors also suggest that Apple is planning for an ‌Apple TV‌ that would offer a console-like gaming experience, and 4K 120Hz support would allow the ‌Apple TV‌ to better compete with the latest flagship gaming consoles.

TheYayAreaLiving ?
This will be a game changer.
Score: 23 Votes (Like | Disagree)

There are 120Hz TVs on the market, which people generally buy for gaming purposes and use with the latest Xbox Series X and PlayStation 5 consoles, both of which support the HDMI 2.1 specification and can output 4K video at 120Hz.

That's not the only reason. 60 Hz tvs don't do a great job with 24 Hz, you get judder because 60/24 = not a clean number. 120 Hz tvs allow for 24 Hz content to play smoothly. Before anyone thinks that means soap opera effect, no, that's frame interpolation which is a different thing that pretty much no one likes.
Score: 23 Votes (Like | Disagree)

b11051973
I have been hoping for this. I have my Apple TV set to match frame rate, to avoid the 3:2 pulldown on 24fps movies and such. This means when playing something like a movie, the Apple TV has to switch between 60fps and 24fps. So, the screen goes black for a couple seconds. Not a very smooth transition. If the ATV can output 120fps, that is divisible by 24. No black screen switching and no 3:2 pulldown. I already have a TV that will support it. Please Apple do this. :)
Score: 19 Votes (Like | Disagree)

CouldBeWorse
This would make sense for Apple Arcade.
Score: 18 Votes (Like | Disagree)

Exactly! From a 144 Hz monitor here, watching a movie while working, it can give me a headache. I understand the appeal for gaming but everything else I feel like 120 Hz is just overplayed as the next consumer thing.
Score: 11 Votes (Like | Disagree)
Read All Comments

Friday September 24, 2021 1:41 pm PDT by Juli Clover
The new iPhone 13 Pro models that launched today are equipped with ProMotion display technology, which allows for adaptive refresh rates ranging from 10Hz all the way to 120Hz, which is ideal for scrolling through content, gaming, and more, because it makes for a smoother viewing experience. Though there's a 120Hz maximum refresh rate, App Store developers have found that most app animations ...
Read Full Article • 203 comments

Tuesday October 5, 2021 6:37 am PDT by Joe Rossignol
Apple is planning two new iPad Pro models with low-power LTPO OLED displays for release in 2023 or 2024, according to Korean website The Elec. The report claims that one of the new models will likely have a 12.9-inch display. While the iPad Pro has featured ProMotion since 2017, the device supports a smaller range of refresh rates between 24Hz and 120Hz. Following in the footsteps of the...
Read Full Article • 59 comments