Apple today announced that its mobile gaming subscription service, Apple Arcade, is gaining 30 classic games including "Fruit Ninja," "Monument Valley," "Solitaire," and "Cut the Rope" as the service passes a total of 180 titles. 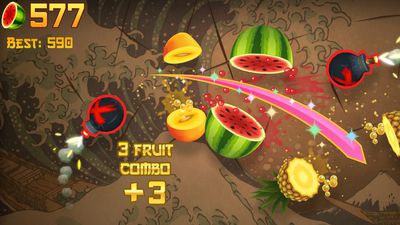 The new ‌App Store‌ Greats add a number of familiar titles from over the years, including:

‌App Store‌ vice president Matt Fischer said that ‌Apple Arcade‌ has become a place for friends and family to enjoy games on a safe and private platform while also touting the praise the service has received since its launch.

In its inaugural year, Apple Arcade won over media critics and fans for its creativity, diverse portfolio, and commitment to players' privacy, providing a safe gaming service to enjoy with family and friends.

‌Apple Arcade‌ launched in September of 2019 as an ad-free mobile game subscription service with no in-app purchases. ‌Apple Arcade‌ is available across the iPhone, iPad, iPod touch, Apple TV, and Mac for $4.99 per month, or as part of the Apple One bundle.

MedRed
You know you're getting old when games like Fruit Ninja are considered classics.
Score: 37 Votes (Like | Disagree)

Why would many of these games prompt people to purchase arcade? Many are already free on the app store

Because the Arcade versions wont have all the BS In -App- Purchases. Ahhhh the glory days of iOS games.
Score: 12 Votes (Like | Disagree)

Lowhangers
Classics to me means Space Invaders, Asteroids and Pac Man...IN THE ARCADE!!!!!

BornAgainMac
I wish all the old Angry Bird games would be put in there (and without ads). They no longer get updates and I can see them getting removed from getting downloaded in the future. There was also a good Mortal Kombat port that was 32-bit I wish could come back.
Score: 6 Votes (Like | Disagree)

brownpaw
Mini Metro is such a great airplane game.
Score: 5 Votes (Like | Disagree)
Read All Comments

Thursday August 27, 2020 5:59 am PDT by Hartley Charlton
New adventure game "The Last Campfire" has arrived on Apple Arcade. The title comes from Hello Games, creators of "No Man's Sky," and tells the story of "a lost ember trapped in a puzzling place, searching for meaning and a way home." The game follows the journey through wilderness "filled with lost folk, strange creatures, and mysterious ruins," in the hope of lighting the last campfire....
Read Full Article • 41 comments

Friday October 9, 2020 7:02 am PDT by Joe Rossignol
This week's addition to Apple Arcade is The Survivalists, an island-themed sandbox game where players explore, build, craft, trade, and even train monkeys with up to three friends in a desperate bid to survive. Available on the iPhone, iPad, Mac, and Apple TV, The Survivalists comes from British game studio Team17, known for games like Overcooked, Worms, and The Escapists. From the App...
Read Full Article • 31 comments

'The Pathless' and 'Reigns: Beyond' Coming to Apple Arcade Soon

Wednesday October 14, 2020 1:34 pm PDT by Juli Clover
Apple today announced the upcoming debut of Reigns: Beyond and The Pathless, two new Apple Arcade titles that are coming to the gaming service in the near future. Reigns: Beyond is the fourth game in the Reigns series, which includes the original Reigns title, Reigns: Her Majesty, and Reigns: Game of Thrones. A card-based game, Reigns: Beyond will ask players to take on the role of an...
Read Full Article • 15 comments

Friday January 22, 2021 8:37 am PST by Hartley Charlton
"NUTS - A Surveillance Mystery" and "Spire Blast" are the latest games to join Apple Arcade's expanding library. NUTS is a single-player surveillance mystery game set in a remote forest, where players are tasked with discovering what a group of squirrels are hiding. Through carefully laying out equipment, recording the squirrels' movements, analyzing their behavior, and reporting...
Read Full Article • 24 comments

Friday September 4, 2020 7:02 am PDT by Joe Rossignol
This week's addition to Apple Arcade is World's End Club, described as a new type of action-adventure game that fuses a thrilling story with 2D side-scrolling action. The game is available on the iPhone, iPad, Mac, and Apple TV. World's End Club revolves around a group of "oddball kids" from Japan who get into an accident while on a bus for a class trip. When they wake up, they find they are ...
Read Full Article • 14 comments

Friday October 30, 2020 2:15 am PDT by Tim Hardwick
New adventure game "South of the Circle" arrived on Apple Arcade today. Made by State of Play, developers of developers of "Kami," "INKS," and "Lumino City," the title is notable for its unique aesthetic inspired by mid-century screen printing. South of the Circle has a narrative focus set in 1964 in Antarctica. Following an aircraft crash, Cambridge academic Peter must fight for survival as ...
Read Full Article • 23 comments