Apple has today announced a new original documentary for Apple TV+ titled "The Year the Earth Changed," which takes a look at the effect of national lockdowns over the past year on wildlife and the natural world. 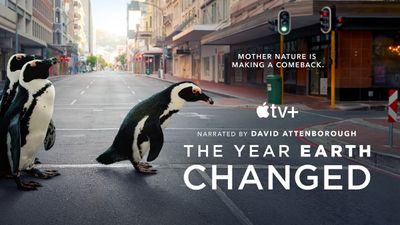 The documentary special, narrated by Emmy and BAFTA Award-winning broadcaster Sir David Attenborough and produced by BBC Studios' Natural History Unit, showcases exclusive footage from around the world over the past year, taking "a fresh new approach to the global lockdown and the uplifting stories that have come out of it."

From hearing birdsong in deserted cities, to witnessing whales communicating in new ways, to encountering capybaras in South American suburbs, people all over the world have had the chance to engage with nature like never before. In the one-hour special, viewers will witness how changes in human behavior — reducing cruise ship traffic, closing beaches a few days a year, identifying more harmonious ways for humans and wildlife to coexist — can have a profound impact on nature.

Described as a "love letter to planet Earth," the documentary highlights the way in which the recovery of nature over the past year "can give us hope for the future." Attenborough said:

During this most difficult year, many people have reappraised the value and beauty of the natural world and taken great comfort from it. But the lockdown also created a unique experiment that has thrown light on the impact we have on the natural world. The stories of how wildlife responded have shown that making even small changes to what we do can make a big difference.

The Year the Earth Changed will premiere globally alongside the second seasons of "Tiny World" and "Earth At Night In Color" on April 16 to celebrate Earth Day 2021, which is the world's largest annual environmental movement.

Season two of Tiny World grants viewers a unique perspective into the scale of the natural world, "illuminating the ingenuity and resilience of the planet's smallest creatures" using 3,160 hours of footage of over 200 species, while Earth At Night In Color reveals the "never-before-seen behaviors of animals after dark, captured using low-light cameras and light from a full moon."

Tiny World and Earth At Night In Color will also be featured in a special "Earth Day room" on ‌Apple TV+‌, showcasing a curated collection of content that promotes the theme of preserving the planet. Also included are "The Elephant Queen" and "Here We Are: Notes for Living on Planet Earth," which debuted last year for the fiftieth anniversary of Earth Day.

Will Attenborough ever go away? And Earth Day, too. A person and day we would all be better off without. lol.

DrRadon
I would watch you brush your teeth if Attenborough narrated it.
Score: 27 Votes (Like | Disagree)

I do hope that there is some actual "SCIENCE" behind this and not just 100% feel good, tree hugging nonsense backed up by nothing.

Then again I doubt I will watch it.

You're asking that the documentary include some "actual" science from one side of your mouth and then rejecting boatloads of science by calling the vaccinations "experimental drugs" out of the other. The weird positions some people are able to juggle simultaneously...
Score: 18 Votes (Like | Disagree)

Lockdowns have been a dream come true for those who love to forbid freedom. And, basically, they are those who condemn people who eat meat but won't condemn animals which eat other animals, because the point for them is not what you eat or what you do, but that you behave as an animal rather than as a person.

Lockdowns have been a sad but necessary reality for those who love to see fellow humans not die and can't trust people to not be selfish and take the virus seriously without being required to.

What happened to draw all the anti-science malcontents to this MacRumors post?

I enjoy most of the nature documentaries that Apple has put on TV+, I’m just as excited for second seasons of the other shows as I am for this new one.

It's no secret that anti-intellectualism has run rampant here in the United States, but it's a shame to see so much of it here on macrumors :(

It has certainly gotten worse since the start of Trump's presidency. Not really surprising considering he treated expert opinion and advise like it was worthless and pretended himself to be an expert in every field. But the roots of the issue are definitely deeper than just one president.
Score: 13 Votes (Like | Disagree)

mtneer
I admire the schedule Mr. Attenborough is keeping at his age.
Score: 12 Votes (Like | Disagree)
Read All Comments

Monday May 17, 2021 5:35 am PDT by Joe Rossignol
Apple today shared the official trailer for "The Me You Can't See," a mental health documentary series from Oprah Winfrey and Prince Harry set to premiere May 21 on Apple TV+. In the series, Apple says Oprah Winfrey and Prince Harry host honest discussions about mental health and emotional well-being with singers, athletes, and other guests, while opening up about their own mental health...
Read Full Article • 107 comments

Wednesday April 21, 2021 11:56 pm PDT by Sami Fathi
In celebration of Earth Day 2021 being held today, Apple is bringing specially curated content to the App Store, Apple TV+, Apple Podcasts, and Apple Maps to highlight mother nature and the environment. In the Apple TV and Apple Books app, Apple will highlight special content in its Earth Day collections that "explores the science and human cost of climate change and its impact on wildlife,...
Read Full Article • 4 comments

Tuesday April 27, 2021 7:27 am PDT by Mitchel Broussard
Apple today shared the first teaser trailer for its upcoming dark comedy show "Physical." The show stars Rose Byrne as a distressed housewife in 1980's San Diego, who gets swept up in the aerobics craze of the decade and has to contend with battling personal demons along her new journey. "Physical" will launch on June 18 on Apple TV+. It was created by Annie Weisman, who has worked on shows...
Read Full Article • 35 comments

Wednesday May 12, 2021 4:00 am PDT by Tim Hardwick
Apple has shared the trailer for its upcoming docuseries "1971: The Year That Music Changed Everything," which premieres May 21 on the Apple TV+ streaming service. Hailing from Universal Music Group's Mercury Studios and On The Corner Films, the eight-part series announced last month is described as an immersive docuseries that will explore the musicians and soundtracks that shaped the...
Read Full Article • 45 comments