On March 24, 2001, a Saturday, Apple began allowing customers to purchase Mac OS X, the successor to the classic Mac OS. The first version of Mac OS X, "Cheetah," was famous for its "Aqua" interface with a water bubble-style design for everything from windows to buttons. 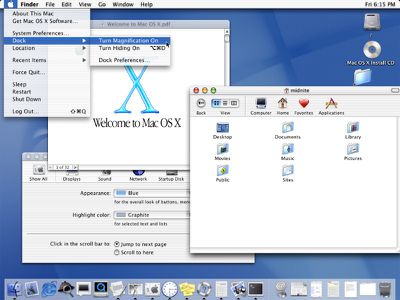 Today, March 24, 2021, marks 20 years since Mac OS X went on sale, and Apple's Mac software has gone through many changes over the course of the last two decades, but it was with Mac OS X that Apple took one of the first steps toward transforming from a company on the brink of failure into one of the world's most successful companies. Mac OS X preceded the launch of the first iPod and heralded what was in store under Jobs' leadership.

Mac OS X was introduced at the January 2000 Apple keynote at the Macworld Expo. Steve Jobs at the time said that Mac OS X would "delight consumers with its simplicity and amaze professionals with its power." He also said it was the "most important software" from Apple since the original 1984 Macintosh operating system.

The Aqua interface introduced the now well-known Dock for easy access to applications and documents, plus it included Apple's revamped Finder for file management. And, of course, Aqua was most well-known for its iconic look, which included translucent scroll bars and buttons.

The new software, which was built on Apple's "Darwin" operating system core, had support for many existing Mac OS apps, but developers were required to "tune-up" their apps, so Apple ultimately rolled it out over a 12 month beta period before putting it up for sale.

At launch, Mac OS X was priced at $129, and its launch was at a time when Apple was still charging Mac users for upgrades. Mac updates got less expensive over the years, and Apple ultimately stopped charging for them in 2013.

The debut of Mac OS X was far from perfect, and it had some major stability issues that Apple needed to work out. Apple followed it up with Mac OS X 10.1 "Puma" just six months later, and since then, has continued iterating on that original 2001 release.

Mac OS X became OS X in 2012 with the release of Mountain Lion, an operating system that introduced a more minimal design that transitioned away from the skeuomorphic designs Apple had used under the leadership of Scott Forstall. OS X Mountain Lion accompanied iOS 7, which is known to be one of the biggest design overhauls to the iPhone operating system.

Apple introduced another major name overhaul in 2013 with the launch of OS X Mavericks, the first version of Mac OS X that wasn't named after a big cat. Apple used big cats from Mac OS X 10.0 (Cheetah) to 10.8 (Mountain Lion).

The last significant change came in 2016 when Apple dropped the X and introduced macOS 10.12 Sierra, with the macOS name meant to better match with iOS. We've had several versions of macOS, culminating in the current release version of the software, macOS Big Sur.

macOS Big Sur brought Apple's biggest design update to macOS since the days of Mac OS X, revamping everything from the curvature of window corners to colors and dock icon designs. Apple designed it to feel fresh and familiar at the same time, including less obtrusive menu bars, a more translucent dock, a uniform squircle shape for app icons, and entirely revamped system sounds.

The update also revamped the Notification Center to add quick access Control Center toggles, plus it has important updates to Safari, Messages, Photos, Maps, and more, with details available in our roundup. Later this year, we're expecting to see macOS 12, and while it likely won't be the design overhaul that Big Sur was, Apple likely has useful new features in store.

Apple Knowledge Navigator
Ahh yes... the days when I could grab a window without having to think about where the bar was.
Score: 68 Votes (Like | Disagree)

bollman
Aqua was way better than the current crap.
I'm sorry, but macOS of today just seems like an incoherent bunch of "ideas" crammed together into an OS.
Old Mac OS X was more like linux with a very slick UI on top of a solid Unix. Now, it's getting to the point of "Windows-style" binary files and strange databases running stuff. Things you're never supposed to touch, and some that are downright out of reach.
Score: 47 Votes (Like | Disagree)

CJ Dorschel
Nothing beats snow leopard. Also important to note development required wiping the system and installing a new beta every two weeks over a 2 to 3 year period. This allowed for proper debugging of the core OS to ensure that third-party apps and plug-ins weren’t causing issues.

I’d rather go back to two to three-year release cycles for $129 than a rushed annual release for free. Big Sur is a big mess. The UI is terrible on desktop systems. It’s washed out and lacks any depth and consistency. No matter how hard I tweaked my 5K displays to compensate for the harsh washed out finder windows and icons it never seemed to make a difference. It’s essentially iPadOS on a Mac.
Score: 47 Votes (Like | Disagree)

Pakaku
Look at that, an OS with some actual depth to the UI design. I think Apple could learn a thing or two from that...
Score: 38 Votes (Like | Disagree)

otternonsense
When the Mac was exciting and cool. I miss those times :(
Score: 32 Votes (Like | Disagree)

mbert
I am still missing the early OSX versions for their clearness and (3d) beauty. Even though now dynamic backgrounds and more transparency are nice, the "flatness" still bothers me, and Big Sur's goodbye from classic window bars I dislike not only for aesthetic reasons.

And if I remember correctly, both were actually "inspired" by others - the "flat" UI design was inspired by MS Windows 8 (shame!), and the "rich" window bars have long been in use e.g. in Gnome on Linux desktops.

Compared to today's look and feel the old OSX versions still produce far more of a whow effect. And after Apple have also closed the door for implementing theming applications it seems like we'll have to live with this for now - until, hopefully, they return to their old design glory.
Score: 29 Votes (Like | Disagree)
Read All Comments