Apple is researching a potential radical redesign for the Apple Watch, including a rounded watch face, wrap-around flexible display, and digitally-customizable watch bands, according to a newly-granted patent filing. 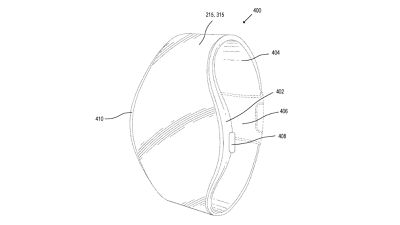 The patent, spotted by MacRumors earlier today, is titled "Display Module and System Applications" and was filed with the United States Patent and Trademark Office. The document outlines how a flexible display could span the entire watch face and the band of a smartwatch for a transformational new Apple Watch design. The elongated display itself is said to be flexible enough to contour to the shape of a user's arm to fit like a normal watch band.

Apple explains that the design includes a display with a "plurality of interconnects" that extend "through the display substrate from the front surface to the back surface, and an array of LEDs are in the display area and electrically connected with the plurality of interconnects." A battery, processor, ambient light sensor, and other vital smartwatch components can be fixed within an enclosure to the rear of the large display unit.

While the filing explains that an OLED display may be sensitive to air and moisture degradation without a protective rigid glass cover, as well be "problematic" with the use of "interconnects," some OLED display technologies may still be appropriate for the radical new design.

Apple also notes that the design could facilitate a "minimized" bezel around the display for a more aesthetically pleasing appearance, and could even "eliminate" the bezel entirely:

In accordance with embodiments of the invention, a bezel width surrounding the display panel can be minimized, for example below 4-5 mm or even less than 1 mm, less than 0.5 mm, or eliminated. Thus, the bezel design of the smartwatch can be designed for aesthetic concerns rather than as a requirement for allocating space for a contact ledge.

As well as being able to select a watch face design, as on current Apple Watch models, the patent explains that users could similarly select a digital band design to be shown on the band segment of the wrap-around display using an "accessory manager" to create a unique look. The filing describes a very similar system for selecting band designs as is currently in place for selecting and customizing watch faces, with the option to do so both on the Apple Watch itself or on a connected iPhone.

Although the Apple Watch's Digital Crown does not appear to be depicted in the design, a separate patent has today been published with the title "Capacitive gap sensor ring for an input device," explaining how the Digital Crown could use two "nested" capacitive rings that move against each other to gain a wider range of input information.

While Apple has yet to release a device with a flexible display, the company is believed to be working on an iPhone with a foldable display. Patents cannot be taken as evidence of Apple's specific intentions, but they do provide valuable insight into what the company is researching and developing behind the scenes.

Moreover, the depiction of an alternative Apple Watch design in a patent is very unusual since Apple is usually conscientious to mirror the current design of the Apple Watch in patent illustrations. Patents focusing on the Apple Watch's physical design itself are even rarer, and may well hint at the future of the device.

Bitmover
Yeah, I wouldn’t get too excited. Most of these are for a watch concept I did for LuxVue 8-9 years ago. Still fun to think what could could be! https://www.ull.mn/luxvue-smart-watch-concept

Jeez with that attitude we’d still be with the iPhone 5 design. Wait...
Score: 13 Votes (Like | Disagree)

jhowarth
Apple needs to thin out the design so it doesn't resemble a 'Dick Tracy' watch so much.
Score: 11 Votes (Like | Disagree)

Mr.Blacky
Why would I want a round display on a smart watch? Why would I want the display to wrap around my wrist? To twist and turn my wrist awkwardly back and forth, when reading something on my Apple Watch?
?
Score: 10 Votes (Like | Disagree)

jmgregory1
Flexible displays like this on a watch are going to get scratched up in a way that even the ion glass doesn’t, as it will need to a plastic screen cover. I would think that the better option for adding more screen space would be to make separate bands have screens on them. This way Apple could sell them as add-ons to the Watch. If it were me, I’d focus on making the Watch with a battery life that goes for multiple days, instead of trying to find ways to add more screen space.
Score: 10 Votes (Like | Disagree)
Read All Comments