In a report today focused on an unactivated temperature/humidity sensor in the HomePod mini, Bloomberg's Mark Gurman briefly mentioned that Apple has "been developing new speakers with screens and cameras." 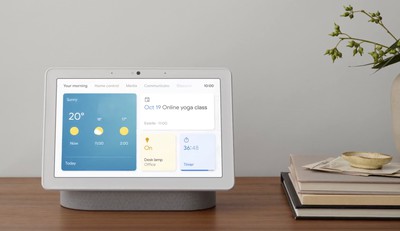 This reporting suggests that Apple could be at least exploring the idea of new HomePod models with a display and camera to compete with the likes of Google's Nest Hub Max, Amazon's Echo Show, and Facebook's Portal, but Gurman cautions that "a launch isn't imminent," so there is no guarantee that Apple will release such a product.

The Nest Hub Max also functions as a "smart digital picture frame" for photo albums, and it can display a live video feed from Nest cameras and video doorbells, making it suitable for a kitchen countertop or bedside table.

Apple's camera-equipped HomePod would presumably offer similar functionality like FaceTime video calling and HomeKit integration if it ever comes to market.

Earlier this month, Apple announced that it is discontinuing the full-size HomePod and shifting its focus to the HomePod mini. Gurman said that Apple still lacks a "unifying strategy" for the smart home market, with some people within the company apparently blaming the lack of progress on Siri's shortcomings compared to Google Assistant and Alexa. Whether new HomePod models with screens and cameras come to fruition remains to be seen.

Cue those who say it works all the time for them. I call BS.
Score: 36 Votes (Like | Disagree)

jerry16
This would be a game changer for HomeKit. A central hub to adjust lights, temp, view cameras etc. I really hope this comes to fruition.
Score: 24 Votes (Like | Disagree)

and 1989 others
If you mount your ipad in front of a HomePod. You already have one of these devices.
Score: 24 Votes (Like | Disagree)

FSMBP
That would be a great control-center concept (with HomeKit on the screen) and everything. If they can figure out how to make it 'affordable' (less than $199), that would be a nice addition.
Score: 19 Votes (Like | Disagree)

with a display and camera

Isn't that basically an iPad?
Score: 16 Votes (Like | Disagree)

shawngt2
Apple, my lord...Why do you have to be so late in the game?This will likely take them a good 1-2 years to develop and by that time there is new tech and people moved on and you have to cancel that too. Like making a mini HomePod should have been the FIRST product years ago. I love my large HomePod, but it was quite frustrating to not be able to expand all around the house without a significant footprint and high price...The entire HomePod team needs a shuffle and head shake.
Score: 15 Votes (Like | Disagree)
Read All Comments