We have a special Thursday giveaway this week, coming to you from Boss Team Games and Gamaga, who want to celebrate the launch of strategic turn-based fighting game Cobra Kai: Card Fighter, which can be downloaded today from the App Store.


Boss Team Games and Gamaga are offering an iPhone 12 Pro to one lucky MacRumors reader, which will come with in-game currency to spend in Cobra Kai: Card Fighter. Two other winners will also get in-game cash to enhance the gameplay experience. 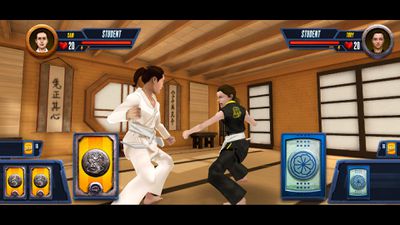 Cobra Kai: Card Fighter, as the name suggests, is a fighting game. It retells the first two seasons of the popular Cobra Kai Netflix show, with players able to choose between rebuilding and reopening the Cobra Kai dojo with Johnny Lawrence or sticking with the traditional Miyagi-do Karate with Daniel LaRusso.

In the game, players will build their dojos, recruit students from the TV series, and train them up to become All Valley Champions before challenging other senseis from around the world. There's a single-player story mode and a PvP multiplayer tournament mode.

Gameplay is card based, with cards based on karate punches, throws, and kicks, plus special attacks and combos for every fighter. Choosing a winning series of cards requires strategy, but with the fight-based theme, the game is action packed. In between challenges, players can train their fighters, level up their belt ranking, build decks, and customize characters.

Cobra Kai: Card Fighter is available starting today, and one lucky winner can enter our giveaway to win an ‌iPhone 12‌ Pro (in the color of your choice), plus $15,000 in-game cash to make purchases like Training Room upgrades, Student Booster Packs, and Tokens.

A second place winner will receive $10,000 in-game cash for the Cobra Kai: Card Fighter game, and a third place winner will receive $6,000 in-game cash. To enter to win our giveaway, use the Gleam.io widget below and enter an email address. Email addresses will be used solely for contact purposes to reach the winners and send the prizes. You can earn additional entries by subscribing to our weekly newsletter, subscribing to our YouTube channel, following us on Twitter, following us on Instagram, or visiting the MacRumors Facebook page.

Due to the complexities of international laws regarding giveaways, only U.S. residents who are 18 years or older are eligible to enter. To offer feedback or get more information on the giveaway restrictions, please refer to our Site Feedback section, as that is where discussion of the rules will be redirected.

Too bad these giveaways aren't registered through Macrumors. So, we don't have to give out our name and e-mail.

I'm the only one who sees your name and email and all I use it for is contacting winners. We don't use your email address and info for anything or give them to giveaway partners (except for winners, sometimes I pass along the email address so companies can send prize tracking info).
Score: 4 Votes (Like | Disagree)

Amacfa
Do people actually win these
Score: 4 Votes (Like | Disagree)

MacOH21
I'm guessing the game has better acting than the show :)
Score: 3 Votes (Like | Disagree)

kildraik
I’ve been a member since 2006, and I feel like this is the first time a proper Apple device giveaway is taking place.
Score: 3 Votes (Like | Disagree)
Read All Comments

Friday January 28, 2022 9:16 am PST by Juli Clover
For this week's giveaway, we've teamed up with MAXOAK to offer MacRumors readers a chance to win a Bluetti portable power station. One winner will receive the 2048Wh high-end Bluetti AC200MAX and two winners will receive the 500Wh Bluetti AC50S. All of these products are great to have on hand for camping, RV use, off-grid living, power outages, emergencies, and more. The AC200MAX is one of...
Read Full Article • 48 comments

MacRumors Giveaway: Win an iPhone 13 and Set of iPhone Cases From CaseBorne

Friday October 22, 2021 11:00 am PDT by Juli Clover
For this week's giveaway, we've teamed up with iPhone case maker CaseBorne to offer MacRumors readers a chance to win one of Apple's 128GB iPhone 13 models along with a set of iPhone 13 cases to go along with it. CaseBorne, rebranded this year from ArmadilloTek, offers a range of different case options that are designed to keep Apple's iPhones safe from bumps, drops, and scratches. CaseBorne ...
Read Full Article • 17 comments

Friday August 27, 2021 11:07 am PDT by Juli Clover
For this week's giveaway, we've once again teamed up with Throwboy to offer MacRumors readers a chance to win one of Throwboy's pillows, which are modeled after classic Apple products and make fun decorations for Apple enthusiasts. Throwboy's pillows are plush, squeezable versions of Apple products like the original iPhone, first iPod, Classic Macintosh, iMac G3, and more. Pillows are priced ...
Read Full Article • 18 comments

MacRumors Giveaway: Win an iPad Folio or Sleeve From Woolnut

Friday February 18, 2022 10:00 am PST by Juli Clover
For this week's giveaway, we've teamed up with Woolnut to offer MacRumors readers a chance to win a Coated Folio or a Coated Sleeve designed to carry and protect Apple's iPads. Available for the 11-inch iPad Pro, 10.9-inch iPad Air, and 12.9-inch iPad Pro, Woolnut's Sleeves and Folios are made from a sustainable matte PU leather alternative that replaces traditional leather while offering...
Read Full Article • 18 comments

Friday February 25, 2022 9:15 am PST by Juli Clover
For this week's giveaway, we've teamed up with Lululook to offer MacRumors readers a chance to win an adjustable Magnetic Stand that's designed for Apple's iPad mini 6, plus a 33W USB-C Wall Charger that can be used alongside it for charging up the iPad. Priced at $60, the Magnetic Stand for iPad mini 6 is a floating stand that holds the iPad mini in place with magnets, turning it into the...
Read Full Article • 33 comments