In a press release today, Apple touted the significant progress it has made as part of its $4.7 billion Green Bond. Thanks to the bond, Apple has generated more than 1.2 gigawatts of clean power, removing an average of 921,000 metric tons of carbon emissions annually. 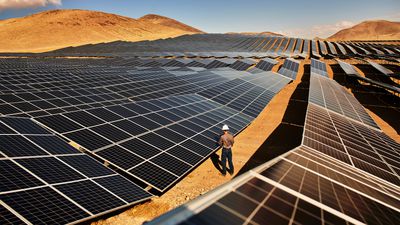 Last year, Apple funded more than 17 projects, resulting in the reduction of nearly 1 million metric tons of carbon emissions globally, equivalent to removing 200,000 cars from the road, according to Apple. Lisa Jackson, Apple's vice president of environment, policy, and social initiatives, says the company is dedicated to pursuing investments to promote clean energy.

We all have a responsibility to do everything we can to fight against the impacts of climate change, and our $4.7 billion investment of the proceeds from our Green Bond sales is an important driver in our efforts. Ultimately, clean power is good business.

In addition to its investment in clean power, Apple has also allocated $2.8 billion into researching and funding new projects that "support low carbon design and engineering, energy efficiency, renewable energy, carbon mitigation, and carbon sequestration." The investments come on top of Apple's commitment last year to become fully carbon neutral across its entire business by 2030.

lusky
They couldn't have waited a wee bit longer and announce that they had generated 1.21 gigawatts? That would have made so many people's day. and we all need wee things like that just now ?
Score: 21 Votes (Like | Disagree)

They couldn't have waited a wee bit longer and announce that they had generated 1.21 gigawatts? That would have made so many people's day. and we all need wee things like that just now ?

bklement
Gotta do a lot more to make up for wireless charging.
Score: 13 Votes (Like | Disagree)

Koni17
Don't really understand all the negativity in the comments here, would you rather they invest in coal power? I think it's great that apple has initiatives like this, sure wish some other companies would follow suit.
Score: 9 Votes (Like | Disagree)

scarecrowmac
Really goes to show the scale of things and how much effort needs to go into reducing our carbon emissions. We emit something like 51 billion tones of CO2 per year, so this project costing 4.7 billion and reducing emissions by just under 1 million tones is just 0.002% of the way there…
Score: 6 Votes (Like | Disagree)

MacManiac1
Do any of these studies take into account what it takes to manufacture the solar panels? Lots of energy for one, but more than that, the mining of all the materials that have to be done to make the panels and the materials have their own issues.
Score: 6 Votes (Like | Disagree)
Read All Comments

Thursday April 1, 2021 12:28 am PDT by Sami Fathi
Long-time Apple supplier TSMC, which produces A-series chips for the iPhone, iPad, and Apple silicon chips for the Mac, will invest $100 billion over the next three years to significantly expand its production capacity to meet ever-increasing demand, Bloomberg reports. TSMC previously announced a planned expenditure of up to $28 billion in 2021 alone; however, an ongoing chip shortage is...
Read Full Article • 49 comments

Wednesday March 10, 2021 12:30 am PST by Tim Hardwick
Apple will make Munich its European Silicon Design Center, the company announced today. Work already being undertaken by Apple in Bavaria's capital is contributing to its custom Apple silicon designs, while the expansion, together with additional investment in R&D, will exceed 1 billion euros in the next three years. Apple says the new state-of-the-art facility will bring hundreds of new...
Read Full Article • 72 comments

Wednesday May 5, 2021 5:07 am PDT by Joe Rossignol
Apple today announced it has awarded $410 million from its Advanced Manufacturing Fund to Pennsylvania-based II-VI, a manufacturer of optical technology. The funds will help create additional capacity and accelerate delivery of future iPhone components, supporting more than 700 jobs in Sherman, Texas; Warren, New Jersey; Easton, Pennsylvania; and Champaign, Illinois, according to Apple....
Read Full Article • 29 comments

Sunday January 23, 2022 10:32 am PST by Juli Clover
Apple is working on a number of new products that are set to launch this fall, and Bloomberg's Mark Gurman says that it will be "the widest array" of new devices that Apple has introduced in its history. In his latest "Power On" newsletter, Gurman explains that Apple is working on four new iPhones (5G iPhone SE, iPhone 14, iPhone 14 Pro, and iPhone 14 Pro Max), an updated low-end MacBook Pro,...
Read Full Article • 211 comments

Friday January 21, 2022 12:43 pm PST by Juli Clover
Earlier this week, Apple began requiring that customers taking advantage of educational discounts in the United States verify their status as a teacher, student, or school staff member through UNiDAYS. The requirement was a major change as Apple had never asked customers to go through a verification process in the United States before, and now, just three days after verification was added,...
Read Full Article • 222 comments