Apple's advertising system for monetizing its apps and services is the target of a new complaint in France that has been brought against it by a lobby group representing startups and venture capital firms (via Bloomberg). 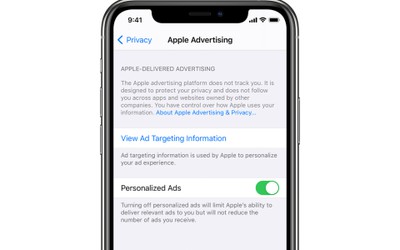 Submitted on Tuesday by France Digitale to the country's National Data Protection Commission (CNIL), the complaint focuses on an Apple feature called Personalized Advertising, which shows ads in the App Store, Apple News, and the Stocks app, based on a user's data.

The group said it had acted because Apple's system doesn't ask for the user's permission to receive the targeted ads, which are enabled by default. Users are "insufficiently informed about the use and the processing of its personal data," the association wrote in the complaint, a copy of which was obtained by Bloomberg.

"Apple keeps the right to choose who is a 'partner' and who is a 'third party' in an arbitrary manner, a quality which may change over time, without the user being informed of such a change," France Digitale wrote, claiming the company is seeking to use data it collects and uses.

The complaint comes ahead of Apple's planned rollout of a new App Tracking Transparency feature, which will limit how much data that third-party advertising systems can gather about users. Following the release of iOS 14.5, all apps that access an iPhone's ad identifier or IDFA will need to ask a user's permission before tracking is allowed.

The upcoming feature has drawn criticism from Facebook and other advertisers who are concerned that many users will not consent to being tracked across apps for ad personalization purposes. However, App Tracking Transparency is different from Apple's own personalized advertising system, which doesn't track users across apps and doesn't identify users to target its ads. Instead, it relies on the anonymous grouping of users' shared characteristics such as apps downloaded, age, country or city of residence, and gender.

However, that hasn't stopped France Digitale from claiming that it still gives Apple an advantage over third-parties when it comes to ‌iPhone‌ app-based advertising. Apple responded to the complaint in a statement given to Bloomberg:

"The allegations in the complaint are patently false and will be seen for what they are, a poor attempt by those who track users to distract from their own actions and mislead regulators and policymakers. Transparency and control for the user are fundamental pillars of our privacy philosophy, which is why we've made App Tracking Transparency equally applicable to all developers including Apple. Privacy is built into the ads we sell on our platform with no tracking."

French Digitale's legal action follows another complaint against Apple that was filed with France's competition authority by advertising companies and publishers in October 2020.

That complaint argued that the enhanced privacy measures brought about by Apple's Apple Tracking Transparency would be anticompetitive. A ruling by the French watchdog is expected soon, and depending on the outcome, Apple could be forced to leave out its enhanced privacy feature in iOS 14.5 for users in the country.

I don’t mind a platform serving me advertisements which are more relevant to me based the information that I offer them, but it’s when they cross that line and build intricate and specific profiles with info and habits beyond what I’d reasonably offer or take that information to sell to others that is rather detestable. For example, I’d like to be presented with apps that might interest me based on my purchases, but really don’t enjoy repeatedly seeing the exact product whose webpage I opened (once and accidentally) for weeks at a time or very specific political advertisements which are targeted based on my race, demographic, and age all at once.
Score: 2 Votes (Like | Disagree)

That's for sure, but I don't think there is such an option for third-parties: they are opt-in no matter the kind of targeting they do.

From the point of view of Apple it makes sense since they cannot verify that the tracking is ultimately "anonymized" by the third-party, but note that from the point of view of an end-user that's also true for Apple: they cannot verify that Apple's tracking is ultimately really "anonymized" in demographic targeting as they claim.

It's ultimately a matter of trust and while I agree Apple is far more trustworthy than Facebook, I'd still rather have their targeting being opt-in too.
Score: 2 Votes (Like | Disagree)

Why would I or anyone care what information some third-person stranger collects for marketing purposes as long as the information collected doesn't include one's personal identity? Possession of a database of the habits of tens or hundreds of millions of anonymous individuals by a corporate group of people …? doesn't bother me.

I don't know why you don't care, but if you don't care then feel free to accept it. But it is not for you to decide for other people the boundaries of what is private or not private.
Score: 2 Votes (Like | Disagree)

Why would they stop the implementation in France? As I understood, it’s actually not strict enough to them? If anything it needs to be improved not disabled

That would likely require Apple making its own Targeted Advertising opt-in, which might go against Apple's interests. After all, the likely reason Targeted Advertising is not currently opt-in and it's enabled by default is that most users would otherwise not enable it when explicitly prompted about it.
Score: 2 Votes (Like | Disagree)

contacos
Why would they stop the implementation in France? As I understood, it’s actually not strict enough to them? If anything it needs to be improved not disabled
Score: 1 Votes (Like | Disagree)

betterbegood
Thinking how you get to choose exactly who you give your cookies to these days I think this is fair. The fact Apple could partner with anyone and you have to suck it up isn't great for the consumer.
Score: 1 Votes (Like | Disagree)
Read All Comments

Tuesday March 16, 2021 7:33 am PDT by Hartley Charlton
Apple is to be investigated by France's data-protection watchdog following allegations that the company's personalized advertising feature violates European Union data protection and e-privacy rules (via Bloomberg). The National Commission on Informatics and Liberty, known as "CNIL," is France's regulator that oversees privacy and data. CNIL is now examining antitrust allegations from...
Read Full Article • 27 comments