Apple plans to unveil new 14-inch and 16-inch MacBook Pro models with Mini-LED-backlit displays in the second half of this year, according to industry sources cited by Taiwanese supply chain publication DigiTimes. The report claims that Radiant Opto-Electronics will be the exclusive supplier of the Mini-LED backlight units, while Quanta Computer is said to be tasked with final assembly of the notebooks. 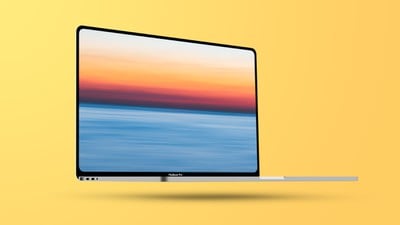 The report lines up with information shared by well-known Apple analyst Ming-Chi Kuo, who expects new 14-inch and 16-inch MacBook Pro models to launch in the second half of this year with brighter Mini-LED displays, Apple silicon chips, a new design with a flat-edged top and bottom, an HDMI port and SD card reader, classic MagSafe charging with a magnetic power cable, and physical function keys instead of the Touch Bar.

Bloomberg's Mark Gurman has also corroborated many of these details, and he was first to report that an SD card reader would be returning to the MacBook Pro.

If all of these rumors pan out, it would be a significant overhaul to the MacBook Pro, with many fan-favorite features returning. There is also lots of anticipation surrounding next-generation Apple silicon given the already-impressive performance of the M1 chip in lower-end machines like the MacBook Air and base model 13-inch MacBook Pro.

Since 2016, the MacBook Pro has only been equipped with Thunderbolt ports and a headphone jack, forcing users to purchase adapters or docks to gain access to an HDMI port, SD card reader, USB-A ports, and other connectivity offered on older MacBook Pro models. Apple touted its "thinnest and lightest MacBook Pro ever," but the decision was criticized by many users and became known as "dongle hell."

It's unclear exactly when Apple would announce the new MacBook Pro models. The "second half of 2021" timeframe could refer to a fall unveiling in September, October, or November, but the new MacBook Pro models could also be announced at WWDC in June and then begin shipping in July, which falls within the second half of the year. The timeframe given by Kuo is simply too broad to pinpoint an exact launch at this time.

Apple is also widely rumored to be planning a new 12.9-inch iPad Pro with a Mini-LED display for release in the first half of 2021, with some reports having claimed that the device could be announced as early as March.

Am I really the only person in the world who actually likes the Touch Bar?

Much like the idea of the iPhone replacing physical buttons depending on app context - it's actually useful when compared to a row of utterly useless buttons marked "F". I don't understand the hatred, or why Apple are caving

Because Touch Bar is terrible. Anyone who knows how to type is looking at the screen, not the keyboard. But it is impossible to use the Touch Bar without looking at it. And since no pressure is required to press the “keys” on the Touch Bar, high speed typists are constantly accidentally triggering touchbar functions by merely brushing it with stray fingers. So it actually makes the computer *worse* for a lot of people - we can’t even pretend the touchbar doesn’t exist.
Score: 50 Votes (Like | Disagree)

illinois2011
If MagSafe is indeed back, I just hope they make the cable detachable from the brick so you don't have to throw out the whole charger when the cable fails. Maybe it could be USB-C on one end and MagSafe on the other and they can continue to use the current bricks?

If this thing is real, I may already be looking at trading in my 2020 MacBook Air.
Score: 42 Votes (Like | Disagree)

QCassidy352
So basically a total repudiation of the 2016 redesign. Good, it’s about time. I’m glad they can admit their mistakes.
Score: 37 Votes (Like | Disagree)

KPOM
I’d like it if they keep Thunderbolt ports on both sides. MagSafe or not, it’s nice being able to connect a charging cable to either side of the MacBook Pro.
Score: 22 Votes (Like | Disagree)

nattK
I wonder how many of the new design changes were originally vetoed by Jony Ive but now that he's no longer at the company, they're going ahead with those changes.
Score: 14 Votes (Like | Disagree)

So basically a total repudiation of the 2016 redesign. Good, it’s about time. I’m glad they can admit their mistakes.

Next step reverse back to OS X 10.6 design
Score: 13 Votes (Like | Disagree)
Read All Comments

Friday January 15, 2021 7:50 am PST by Joe Rossignol
Apple analyst Ming-Chi Kuo today outlined his expectations for all-new 14-inch and 16-inch MacBook Pro models later this year, including the return of the classic MagSafe charging connector, the removal of the Touch Bar, a new flat-edged design, and the return of more ports built into the notebooks for expanded connectivity. One of the most controversial design changes to the MacBook Pro...
Read Full Article • 191 comments

Friday January 22, 2021 7:50 am PST by Joe Rossignol
Last week, reputable analyst Ming-Chi Kuo outlined his expectations for new 14-inch and 16-inch MacBook Pro models later this year, including the return of the MagSafe charging connector, the removal of the Touch Bar, a new flat-edged design, and the return of more ports built into the notebooks for expanded connectivity. A concept of a modern MacBook Pro with an SD card reader Kuo did not...
Read Full Article • 542 comments