Google today finally updated its YouTube iOS app for the first time in over two months, becoming one of the highest-profile Google apps to see an update since early December when Apple began requiring that developers disclose privacy practices for each of their apps in order to have their updates approved. 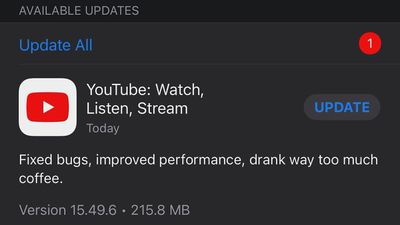 Most of Google's apps have yet to be updated since the requirement went into effect, even though Google said in early January that it would be adding privacy data for its apps within the following week or so.

Google had actually already added privacy information for the YouTube app prior to today's update, as noted earlier this month by Apple Terminal. Still, it's notable that the app itself has seen its first update since December 7, as Google has typically pushed updates for the YouTube app every week or two.

Many other major Google apps like Google, Google Chrome, Gmail, Google Maps, and Google Meet have still not been updated and do not have privacy information displayed on their App Store listings. Google-owned Waze did finally update its iOS app a few days ago, adding privacy information as part of the update as required by Apple.

Google has denied that it is holding back iOS app updates in order to delay revealing its privacy practices, but many users have found that hard to believe considering the sudden slowing of app updates coinciding with Apple's disclosure deadline and continued updates for Google's various Android apps.

Earlier this week, the Gmail iOS app even began displaying "out of date" warnings when trying to add a new account, even though there is no new version of the app available and there have been no updates to the Gmail iOS app since December 1.

mikevangorkom
The AppleTV version of the YouTube app hasn’t been updated since September 20, 2020.
Score: 19 Votes (Like | Disagree)

kshitijshah
Does it support PiP yet?
Score: 16 Votes (Like | Disagree)

dojoman
Typical POS Google. YouTube ads in 2 minutes into video and another at 5 min. tv channels have less ads.
Score: 14 Votes (Like | Disagree)

ouimetnick
Why is a video player client 215.8 MB in size?
Score: 12 Votes (Like | Disagree)
Read All Comments