Designer Antonio De Rosa has created 3D renders of Apple's long-rumored mixed-reality headset based on recent reports about the device, giving the first photorealistic look at the mysterious Apple device. 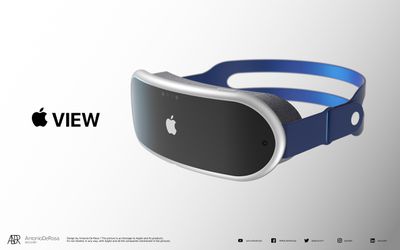 De Rosa tentatively titles Apple's mixed-reality headset device the "Apple View," but there has been no evidence that this is the company's chosen moniker. What Apple may call the device remains pure speculation. Nevertheless, in terms of design, the render appears to have carefully considered many of the points put forwards by recent reports about the device, which have proliferated in recent months as it edges closer to production.

The main inspiration for the render is clearly the basic sketch provided by The Information, which said that it had seen internal Apple images of a "late-stage prototype" late last year. If the images seen by The Information are correct, De Rosa's renders may offer the most reliable look yet at the design of Apple's mixed-reality headset.

The Information described the headset's design as a "sleek, curved visor attached to the face by a mesh material and swappable headbands." The report claimed that the headbands will be offered in a variety of colors, which De Rosa has rendered. A headband containing batteries to extend the headset's battery life, as well as one with speakers for Spatial Audio from AirPods Pro and AirPods Max, are also believed to be undergoing tests.

The Information also said that Apple's headset will be equipped with more than a dozen cameras and JP Morgan has speculated that the device will include various LiDAR scanners, much like the iPad Pro or the iPhone 12 Pro. De Rosa appears to have included these in his render.

While these cameras and scanners are believed to be used to track users' hand movements, one of the main features of the headset is understood to be the ability to pass video of the real world through the visor and display it to the user, creating a "mixed-reality effect." Bloomberg's Mark Gurman described the headset as follows:

As a mostly virtual reality device, it will display an all-encompassing 3-D digital environment for gaming, watching video and communicating. AR functionality, the ability to overlay images and information over a view of the real world, will be more limited.

The headset is said to contain two ultra-high-resolution 8K displays and advanced eye-tracking technology. Since the device is too compact to allow users to wear glasses, Bloomberg explained that Apple has developed a system in which custom prescription lenses can be inserted into the headset over the displays.

Analyst Ming-Chi Kuo has said that Apple will reveal an augmented reality device this year, and according to JP Morgan, the device will launch in the first quarter of 2022. The headset is expected to be priced around $3,000, competing with the likes of Microsoft's HoloLens 2, which costs $3,500.

Visit De Rosa's website to see his full selection of product renders, one of which was among the first depictions of the Apple Watch from 2012.

sniffies
I love looking at renders because it makes me happy knowing that's exactly what the final product will not look like.
Score: 32 Votes (Like | Disagree)

Cosmosent
Is this supposed to be the Swimming version ?
Score: 11 Votes (Like | Disagree)

MacknTosh
“What Apple may call the device remains pure speculation.”

....as opposed to everything else in the article which is based on solid facts.
Score: 7 Votes (Like | Disagree)

kiensoy
Apple would never put the Apple logo front and center like that. The AirPods Max don’t even have the logo visible at all.
Score: 6 Votes (Like | Disagree)

sfkeepay
“Apple view“? Come now. We all know it’ll be the “iEye.”
Score: 5 Votes (Like | Disagree)
Read All Comments

Monday January 30, 2023 12:55 am PST by Tim Hardwick
Apple will launch a foldable iPad with a carbon fiber kickstand sometime next year, according to analyst Ming-Chi Kuo. Subscribe to the MacRumors YouTube channel for more videos. In a series of tweets, Kuo said he expects an "all-new design foldable iPad" to be the next big product launch in the iPad lineup, with no other major iPad releases in the next nine to 12 months. The analyst said he...
Read Full Article • 215 comments