Qualcomm today introduced the Snapdragon X65, the world's first 10 Gigabit 5G modem and antenna system for smartphones, enabling theoretical data speeds up to 10 gigabits per second. Apple will likely use the Snapdragon X65 in 2022 iPhones. 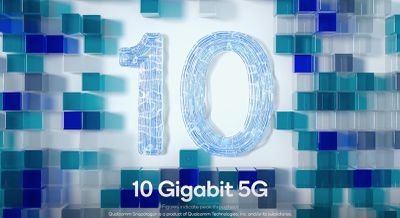 While real-world download speeds will likely remain far below the peak of 10 gigabits per second, devices equipped with the Snapdragon X65 should see faster 5G speeds overall. The modem has many other benefits, too, including improved power efficiency, enhanced coverage for both mmWave and sub-6 GHz bands, and support for all global commercialized mmWave frequencies, including the new n259 (41 GHz) band.

As with the previous-generation Snapdragon X60, the X65 can aggregate data from mmWave and sub-6GHz bands simultaneously to achieve an optimal combination of high-speed and low-latency coverage. The modem is paired with Qualcomm's new fourth-generation mmWave antenna module for extended mmWave coverage and power efficiency.

In 2019, Apple and Qualcomm settled a legal battle and reached a multiyear chipset supply agreement, paving the way for Apple to use Qualcomm's 5G modems, starting with the Snapdragon X55 in iPhone 12 models. Beyond that, a court document from the settlement revealed that Apple will likely use the Snapdragon X60 modem for 2021 iPhones, followed by the Snapdragon X65 in 2022 iPhones.

The Snapdragon X65 could be the last Qualcomm modem used in iPhones, as Barclays analysts and multiple other sources have forecasted that Apple will switch to its own in-house 5G modem for iPhones by 2023.

laudern
Happy Gilmore accomplished that feat no more than an hour ago.
Score: 10 Votes (Like | Disagree)

svanstrom
Practically speaking I need those speeds in my iPhone about as much as I need a smaller battery.

Anyone here that actually have a legit reason for such a speedy iPhone?
Score: 7 Votes (Like | Disagree)

I see this moreso about freeing up the airwaves quicker to be able to serve more people before it slows. Using round numbers for ease... if my download takes 1 second instead of 10, a very simple view of this says 9 others can occupy my remaining 9 seconds at the same level of service that I had been given.
Score: 6 Votes (Like | Disagree)

We’ve consumed the same amount of data online since the 90s. All of these speed increases are such a waste.

Friday March 12, 2021 1:35 pm PST by Juli Clover
Qualcomm is having a hard time keeping up with demand for the processor chips that Android manufacturers rely on, reports Reuters. Chip shortages have been impacting multiple industries, and have now hit the electronics business. There's no indication that Qualcomm's supply troubles will impact Apple, but smartphone manufacturers like Samsung could be in trouble. Apple develops its own...
Read Full Article • 50 comments

Tuesday March 16, 2021 4:37 am PDT by Hartley Charlton
Huawei will begin negotiating for royalties from Apple and Samsung for access to its portfolio of patents on 5G technology (via Bloomberg). Huawei is the owner of the world's largest collection of 5G patents and is seeking to charge other large tech companies a "reasonable" fee for access to them, creating a substantial new source of revenue. Huawei's Chief Legal Officer, Song Liuping,...
Read Full Article • 79 comments

Sunday January 23, 2022 10:32 am PST by Juli Clover
Apple is working on a number of new products that are set to launch this fall, and Bloomberg's Mark Gurman says that it will be "the widest array" of new devices that Apple has introduced in its history. In his latest "Power On" newsletter, Gurman explains that Apple is working on four new iPhones (5G iPhone SE, iPhone 14, iPhone 14 Pro, and iPhone 14 Pro Max), an updated low-end MacBook Pro,...
Read Full Article • 211 comments

Friday January 21, 2022 12:43 pm PST by Juli Clover
Earlier this week, Apple began requiring that customers taking advantage of educational discounts in the United States verify their status as a teacher, student, or school staff member through UNiDAYS. The requirement was a major change as Apple had never asked customers to go through a verification process in the United States before, and now, just three days after verification was added,...
Read Full Article • 223 comments