A sudo bug that can grant an attacker root access has been discovered to affect macOS Big Sur (via ZDNet). 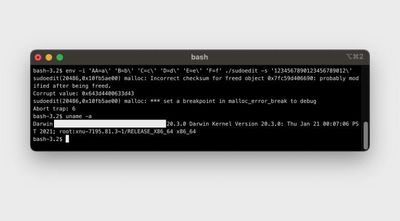 The security vulnerability, identified last week as "CVE-2021-3156" by the Qualys Security Team, affects sudo, which is a program that allows users to run commands with the security privileges of another user, such as an administrator. The bug triggers a "heap overflow" in sudo that changes the current user's privileges to enable root-level access. This can give an attacker access to the entire system. An attacker would need to gain low-level access to a system first to be able to exploit the bug, such as via planted malware.

Sudo is part of many Unix-like systems, including macOS, but it was initially unknown if the vulnerability affected Mac machines since it was only tested by Qualys on Ubuntu, Debian, and Fedora. Security researcher Matthew Hickey has now confirmed that the most recent version of macOS, macOS Big Sur 11.2 can be subject to the sudo attack.

CVE-2021-3156 also impacts @apple MacOS Big Sur (unpatched at present), you can enable exploitation of the issue by symlinking sudo to sudoedit and then triggering the heap overflow to escalate one's privileges to 1337 uid=0. Fun for @p0sixninja pic.twitter.com/tyXFB3odxE — Hacker Fantastic 📡 (@hackerfantastic) February 2, 2021

Last week, there was speculation that the macOS Big Sur 11.2 update may address the sudo vulnerability, though it was not definitively known at the time if the bug would affect macOS. While it was found that sudo was left unchanged in macOS Big Sur 11.2, it is now clear that macOS is affected by the exploit.

With some minor modifications, Hickey found that the sudo bug could be used to grant attackers access to macOS root accounts, and the discovery has now been verified by Carnegie Mellon University vulnerability analyst Will Dormann.

Apple has reportedly been notified of the CVE-2021-3156 vulnerability, and due to the severity of the issue, a patch will likely be released soon.

This vulnerability has been present for more than a decade in all sorts of UNIXes! It's not something at all limited to Apple's QA...
Score: 34 Votes (Like | Disagree)

So, mostly free OSes. That's much of a defense....

Devs knew about the potential, and chose not to address it. They would rather rush a beta product to market.

One day you will learn more about software and you will look back at this comment and say "wow, I was totally clueless back then."
Score: 27 Votes (Like | Disagree)

Wow I thought this would have been patched out in 11.2. Hopefully we will get a
supplemental patch shortly.

I'd think we'd have better tools/procedures for finding bugs like this a lot sooner.

Is there not an automated tool that can look at some code and say "hey, right here it's possible for a heap overflow to occur and there's no error handling code to deal with it"?

Sure there are tools that catch some of these problems via static analysis etc and there are languages where this class of problems might not even occur.

But it is also true that the day that the CVE was released I updated my Linux servers and got a fixed/patched sudo, while even macOS 11.3 beta1 still has the issue, so this is also indicative of Apple release engineering capabilities, or lack of them.
Score: 8 Votes (Like | Disagree)

So is this a zero day, drive-by vulnerability? Or does the attacker have to have physical access?

"An attacker would need to gain low-level access to a system first to be able to exploit the bug, such as via planted malware."
Score: 8 Votes (Like | Disagree)
Read All Comments

Tuesday February 9, 2021 10:13 am PST by Juli Clover
Apple today released macOS Big Sur 11.2.1, the third update to the macOS Big Sur operating system that launched in November. macOS Big Sur‌ 11.2.1 comes a little over a week after the release of macOS 11.2. The new ‌‌‌macOS Big Sur‌‌ 11.2.1‌ update can be downloaded for free on all eligible Macs using the Software Update section of System Preferences. According to Apple's...
Read Full Article • 143 comments

Tuesday February 9, 2021 11:32 am PST by Juli Clover
The macOS Big Sur 11.2.1 update that Apple released today fixes a sudo security vulnerability that could allow an attacker to gain root access to a Mac. According to an Apple security support document, the bug, CVE-2021-3156, was addressed in the update by updating to sudo version 1.9.5p2. Apple has also fixed the bug in Supplemental Updates made available for macOS Catalina 10.15.7 and...
Read Full Article • 52 comments