In celebration of Black History Month, Apple today released a limited-edition Black Unity Apple Watch Series 6 and a Black Unity Sport Band, both of which are now available to order in the United States and many other countries. 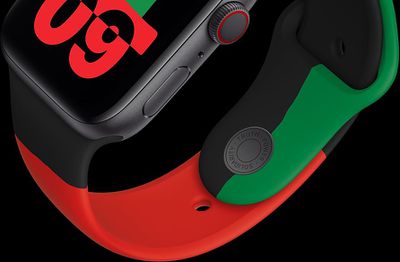 The custom Apple Watch has a Space Gray aluminum case inscribed with the words "Black Unity" on the back. The watch comes with a Black Unity Sport Band that Apple says was inspired by the colors of the Pan-African flag, and the band's metal pin has a custom laser-etched message that reads "Truth - Power - Solidarity."

The Black Unity Apple Watch Series 6 starts at $399, while the Black Unity Sport Band is also available to order separately for $49. Apple said the watch will be available in February only, while the band will remain available throughout the year. Orders are currently estimated to ship in one business day on Apple's online store.

The limited-edition Apple Watch is complemented by the new "Unity" watch face in watchOS 7.3, also based on the Pan-African flag.

Rafael Zeier has shared a German-language unboxing on YouTube:


Apple says it supports organizations dedicated to advancing racial equity and justice in the United States and around the world, including the Black Lives Matter Support Fund via the Tides Foundation, the European Network Against Racism, the International Institute on Race, Equality and Human Rights, the Leadership Conference Education Fund, the NAACP Legal Defense and Educational Fund, Inc., and Souls Grown Deep.

Thursday December 23, 2021 7:28 am PST by Mitchel Broussard
Amazon this week introduced a new record low price on the Apple Watch Series 7, dropping the 41mm GPS Green Aluminum model with a Clover Sport Band to $339.00, down from $399.00. At $60 off, this is the lowest price we've seen yet on the new Apple Watch Series 7, and if you order soon and pay for next-day shipping, it'll arrive in time for Christmas. Note: MacRumors is an affiliate partner...
Read Full Article • 10 comments

Monday December 5, 2022 11:44 am PST by Juli Clover
Due to production issues at Apple supplier factories in China, the iPhone 14 Pro and iPhone 14 Pro Max are backordered and basically out of stock at every store. If you were planning to gift or receive an iPhone 14 Pro model for the holidays and didn't already get one, you're basically out of luck because they're gone until late December. Subscribe to the MacRumors YouTube channel for more ...
Read Full Article • 162 comments