Apple TV+ subscribers have begun receiving emails from Apple letting them know that they'll continue to be credited $4.99 for each month they've been charged for the service from February through June 2021. 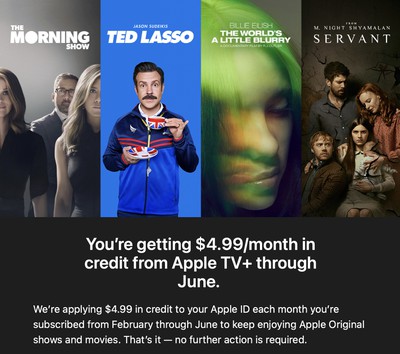 The credit will be applied to a subscriber's Apple ID and can be used for games, movies, and other Apple services.

The last time Apple issued credits to ‌Apple TV+‌ subscribers was in November 2020. On that occasion, the credits were deposited monthly through January 2021, so Apple is effectively extending the credits for another five months. As before, expect the amount to vary based on ‌‌Apple TV+‌‌ pricing in other countries.

Apple's email suggests the credits are being given to allow subscribers more time to check out the latest Apple original content, but it initially described the deposits as a thank you to users for subscribing to the service.

Back in October, ‌Apple TV+‌‌ subscribers who have free access to the service through an eligible device purchase beginning in September 2019 had their one-year trial extended until February 2021, and in January, Apple renewed free trials until July.

I tried a bunch of stuff. Not for me.

hagar
I think ATV+ is destined to remain a niche service. In typical Apple fashion they’re doing their own thing: some TV shows and documentaries with progressive societal themes. And some movies. Definitely quality over quantity. While I very much do like their content, I’m afraid most people will not be compelled to subscribe and pay.
Score: 18 Votes (Like | Disagree)

svanstrom
Thank you, Apple, for the email reminding me to cancel a service that I'm not using. ?
Score: 14 Votes (Like | Disagree)

bigchrisfgb
Everyone saying this means Apple TV is failing are possibly missing the point.

Apple may very well be doing this because large parts of the world are in lockdown and many people are having to stay at home. This could be a way of them helping people cope, by giving them something. Each time they have set a date when it ends, it has always roughly been around when each lockdown has been scheduled to end. This time it takes us into summer when a large portion if not all of the 1st world’s population will be vaccinated.
Score: 13 Votes (Like | Disagree)

Thank you, Apple, for the email reminding me to cancel a service that I'm not using. ?

Already bailed. Tried several shows. Didn’t enjoy one. I think Apple is disappointed in tv+ numbers. So give it for free. Pad the numbers of users.

Members here think they speak for the majority of users. Some here defend Apple at all costs. Lol.
Score: 12 Votes (Like | Disagree)

They haven’t got enough content yet. It’s taking time to build up a catalogue. So they’re giving people a free pass as a taster. Give it a couple of years and Apple will be competing with Netflix and Amazon.

Thursday May 6, 2021 6:01 pm PDT by Juli Clover
Apple introduced the new Apple Card Family feature at its April event, unveiling the new functionality that will let two people share an Apple Card and build credit together and that will also let children use a family Apple Card for purchases. Ahead of the Apple Card Family launch, Apple has shared some specifics on how it will work in a new support document. For account co-owners, each...
Read Full Article • 41 comments

Monday April 26, 2021 2:19 am PDT by Sami Fathi
Apple TV has received the proper and needed regulatory approval to officially launch in mainland China, according to sources across Chinese social media platform Weibo and popular local tech blogger @Voooolks. According to the blogger, who has more than 1.4 million followers on Weibo, Apple TV has received approval from China's State Administration of Press and Publication, Radio, Film, and...
Read Full Article • 15 comments

Saturday November 14, 2020 7:50 pm PST by Frank McShan
Apple TV+ subscribers who have paid for an annual or monthly plan have begun receiving emails from Apple letting them know that they'll be credited $4.99 for each month subscribed through January 2021. The amount varies based on Apple TV+ pricing in other countries, including $5.99 per month in Canada and $7.99 per month in Australia. The credit will be applied to a subscriber's Apple ID and ...
Read Full Article • 59 comments

Apple CEO Tim Cook: We Feel 'Really Good About Where We Are' With Apple TV+

Wednesday April 28, 2021 2:54 pm PDT by Juli Clover
During today's earnings call covering the second fiscal quarter of 2021, Apple CEO Tim Cook was asked about Apple TV+ and whether he would provide details on how many paid subscribers the service has. Cook declined to provide specific numbers, but he said that Apple TV+ is going "very well" and that Apple feels "really good" about where Apple TV+ is at.TV+ is going very well, as you know the ...
Read Full Article • 87 comments

Friday January 29, 2021 5:15 am PST by Hartley Charlton
"Palmer," an original film that follows a former college football phenomenon who returns to his hometown after a stint in prison, is now available exclusively on Apple TV+. Described as a story of "redemption, acceptance, and love, Palmer stars Justin Timberlake in its titular role. Written by Cheryl Guerriero, "Palmer" follows a former college football phenomenon named Eddie Palmer...
Read Full Article • 37 comments