Samsung recently came out with Bluetooth-enabled item trackers called SmartTags, beating Apple's rumored AirTags to market. With ‌AirTags‌ still set to launch later this year, we thought we'd check out Samsung's SmartTags to see just what Apple will be competing with.

Subscribe to the MacRumors YouTube channel for more videos.
There are already multiple Bluetooth-enabled item tracking options on the market, the most popular of which is Tile, and Samsung's SmartTags are similar in both design and functionality to Tile's offerings. The SmartTags are square-shaped with a small cutout at the top where a keyring can be connected, allowing them to be attached to a range of items.

‌AirTags‌ are likely going to be similar, but rumors suggest they'll have a round design and will use various holders instead of having a built-in attachment point. 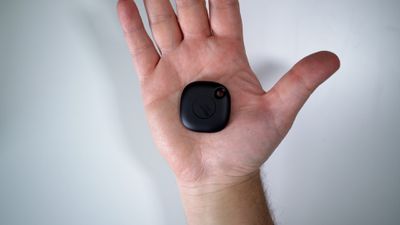 In the SmartThings app, there's a map where you can see the physical location of the tag (and the item it's attached to), plus you can have it play a chime if the item is located nearby. For items lost further away, Samsung has a "Galaxy Find Network" crowd tracking feature that allows other Galaxy devices to ping lost tags to offer up a better chance of finding a lost device.

Tile has a similar crowd tracking network feature, and Apple's ‌AirTags‌ will too. ‌AirTags‌ will be trackable through the Find My app alongside your Apple devices, and Apple in iOS 13 introduced a ‌Find My‌ feature that lets lost devices be tracked even without a cellular connection by leveraging devices owned by other people. This functionality will likely be available for the ‌AirTags‌, and with so many Apple devices out there, it's going to make it easier to find something that's lost.

SmartTags are Bluetooth-based and need to connect to a device using Bluetooth for their location to be tracked. ‌AirTags‌ will also work over Bluetooth, but ‌AirTags‌ are expected to have an edge over the SmartTags because Apple is expected to take advantage of Ultra Wideband technology, which will utilize the U1 chip in recent iPhones to allow for more precise indoor positioning and tracking.

There's a little button on the SmartTag that can be tapped to play a sound on the phone, so if you lose your phone but have a SmartTag nearby, it'll help you find your lost device.

One neat SmartTag perk includes smart home control. The button on the SmartTag can be customized to control smart home devices through various long and short button presses. That's not something that's rumored for the ‌AirTags‌, but it's possible that we could see Apple use the positioning functionality to interface with HomeKit devices through automations.

SmartTags are using a traditional CR2032 battery that's replaceable, and it's not yet clear what Apple's battery solution will be. There have been rumors that Apple will use rechargeable batteries and rumors of a replaceable battery, so we'll have to wait to see what Apple ends up implementing.

We've been waiting on the ‌AirTags‌ for a long time now, but multiple rumors have suggested that 2021 is the year we'll finally see a launch, so there's a possibility we may not have to wait too much longer to see Apple's solution.

Price wise, Samsung is charging $30 for the SmartTags, which is competitive with other offerings on the market. It's possible Apple will also aim for that general price point, but we don't really have word on what ‌AirTags‌ will cost.

SmartTags are useful for those who have Galaxy devices, but they don't have much of an edge over existing trackers from companies like Tile, so there's not much of a reason for an Apple user to pick up a SmartTag.

Professor Rucy
But don't fret... AirTags are just around the corners' corner's corner. Next quarter!
Score: 14 Votes (Like | Disagree)

MauiPa
why hasn't Tile started whining about not being included in the Samsung find my software? Did they give up on that tactic? It always was pretty stupid, they should have created the killer app that everyone wanted to use whether you used Tile or not.
Score: 12 Votes (Like | Disagree)

Jazurm
How broke do you have to be to still own physical car keys? Just kidding, I'm that broke.
Score: 12 Votes (Like | Disagree)

Apple: "We took our time to make a quality product that people will actually want to use."