A few weeks ago, Adobe dropped support for Flash Player and continued to strongly recommend that all users immediately uninstall the browser plugin for security reasons. And starting today, Adobe has gone one step further and blocked Flash content entirely. 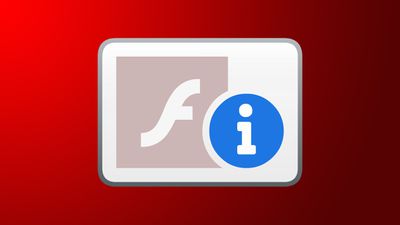 When a user attempts to load a Flash game or content in a browser such as Chrome, the content now fails to load and instead displays a small banner that leads to the Flash end-of-life page on Adobe's website. While this day has long been coming, with many browsers disabling Flash by default years ago, it is officially the end of a 25-year era for Flash, first introduced by Macromedia in 1996 and acquired by Adobe in 2005.

"Since Adobe will no longer be supporting Flash Player after December 31, 2020 and Adobe will block Flash content from running in Flash Player beginning January 12, 2021, Adobe strongly recommends all users immediately uninstall Flash Player to help protect their systems," the page reads. Adobe has instructions for uninstalling Flash on Mac, but note that Apple removed support for Flash outright in Safari 14 last year.

Adobe first announced its plans to discontinue Flash in 2017. "Open standards such as HTML5, WebGL, and WebAssembly have continually matured over the years and serve as viable alternatives for Flash content," the company explained.

Adobe does not intend to issue Flash Player updates or security patches any longer, so it is recommended that users uninstall the plugin.

Over the years, Flash had an infamous reputation due to numerous security vulnerabilities that exposed Mac and PC users to malware and other risks, forcing vendors like Microsoft and Apple to work tirelessly to keep up with security fixes.

Apple's co-founder and former CEO Steve Jobs offered his "Thoughts on Flash" in a 2010 open letter, criticizing Adobe's software for its poor reliability, security, and performance. Jobs also said that Apple "cannot be at the mercy of a third party deciding if and when they will make our enhancements available to our developers."

Flash's discontinuation should not heavily impact most users since many popular browsers have already moved away from the plugin. Additionally, iPhone and iPad users are not affected by the change, as iOS and iPadOS have never supported Flash.

bitsmith
I think it's important to remember how divisive Apple's decision to not support Flash on iDevices was at the time. Detractors said it would severely limit the use of iPhones and iPads because they couldn't access the "full" internet (I think something like 3/4 of video on the internet at the time was Flash-based).

As someone who used Macromedia Director a lot back in the day, I'm glad to see the last nails finally in this coffin. There are lots of issues with the state of the modern web, but I'm glad we've mostly moved away from the weird fifedoms of proprietary plugins/codecs.

apparatchik
Im starting a crowdfunding campaign to keep Flash running and eventually port it to Apple Silicon, click here if you would like to take part. jk.
Score: 15 Votes (Like | Disagree)

yellow8
There are some things that I'll not regret. Flash is one of them.
Score: 13 Votes (Like | Disagree)
Read All Comments