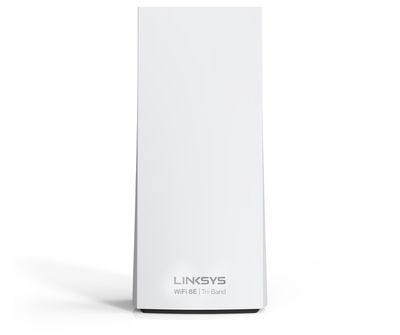 The Linksys AXE8400 uses Qualcomm's Networking Pro 1210 platform to offer speeds that Linksys says are 2x faster than competing routers. According to Linksys, it is an ideal choice for homes that use up a lot of bandwidth as it can support multiple simultaneous activities for those who learn, work, and live all in one place.

The new Linksys system is certified with the Wi-Fi Alliance and the FCC, and it has tri-band capabilities, supporting 2.4GHz, 5GHz, and 6GHz, plus there's a 5Gb/s WAN port. There are four Gigabit LAN ports and a single USB 3.0 port for hardware connections.

The Linksys AXE8400 is able to cover up to 3,000 square feet per node and can handle up to 65 connected devices all sharing the same bandwidth. It is compatible with other Linksys Intelligent Mesh products and can support smart devices that are 6E-certified and those that are not.

With the Linksys aware technology, existing smart devices serve as points of communication for greater motion sensing range. Features include motion alerts viewable in the Linksys app when activity is detected, customizable motion sensitivity levels, and a live graph to show real-time and historical motion data throughout the home.

Twinsbb17
Wow, that's pricey! I've had occasional hiccups with our Wi-Fi 5 Velop 3 node setup but am curious if 6/6e would fix any of the issues. Might have to wait for prices to come down first though.
Score: 3 Votes (Like | Disagree)

Does it have a dedicated backhaul between hubs or is it another “mesh” router system that halves bandwidth per unit.

wifi 6e has dedicated backhaul. The backhaul on a 6ghz network is the primary benefit of 6e.
Score: 3 Votes (Like | Disagree)

I'm going to run Cat 6a in my house. Every time I buy a new WiFi system, 3 years later, some combination of the need for more band width for evolving use cases and neighborhood interference as neighbors adopt similar tech results in needing to buy another WiFi system to compensate for it. 6a will help me get and keep ahead of it long enough for my next household move. I will continue to use WiFi but limit it to tying mobile wireless devices to my internet connection.
Score: 3 Votes (Like | Disagree)

Their regular Wi-Fi 6 models are equally crazy expensive, and they never go on sale.

I can actually spend money on a single node as long as I can use it as my main router paired with my existing Wi-Fi 5 Velop nodes. I will certainly not that price for more than one of these.