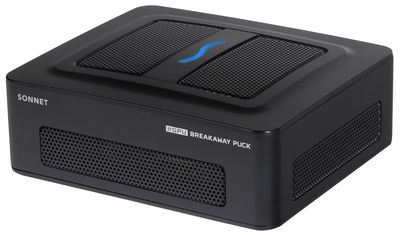 The two new models replace the now-discontinued eGFX Breakaway Puck Radeon RX 560 and Radeon RX 570 eGPUs, yet they retain the same form factor while delivering up to 300 percent more performance.

Each dock now includes two USB ports for connecting other devices and a second Thunderbolt 3 port to fully support Thunderbolt displays, including Apple's Pro Display XDR and the LG UltraFine 5K Display. Both eGPU Breakaway Puck models support up to three 4K, 60 Hz displays or one 6K and two 4K displays at the same time.

Sonnet says that its new eGPU docks are designed for professionals who need to run graphics-intensive applications on their Mac, with a focus on portability and external display connectivity, as well as quiet, reliable operation.

Spock
Seems like a lot of money for an almost two year old card..
Score: 8 Votes (Like | Disagree)

Presumably they wouldn't have bothered if Apple was going to end eGPU support in the next few months... I would imagine that they have some degree of insider knowledge...

That’s a big assumption. The ARM Transition is still likely going to take a couple years and Intel Machines will be in use for a lot longer.
Score: 6 Votes (Like | Disagree)

Why buy this when you can get Razer Core X + other AMD card and be able to upgrade in the future?

Since the GPUs support DSC, it may be possible to connect two Apple Pro Display XDR displays using a Thunderbolt 4 hub or dock that has more than one downstream Thunderbolt 4 port. I haven't seen any reviews of the OWC Thunderbolt 4 Hub or Dock connected after another Thunderbolt 3 device though.

weaztek
I have a Sonnet Breakaway Puck RX570 and it works like a champ. Let's hope Apple adds eGPU support on the new M1s and beyond! Because the M1 graphics performance is good but not great.
Score: 3 Votes (Like | Disagree)

UltimaKilo
Who would pay that for such a terrible and old GPU in 2021? ?
Score: 3 Votes (Like | Disagree)
Read All Comments

Tuesday March 8, 2022 12:37 pm PST by Juli Clover
Apple today introduced the Studio Display, a lower-cost display option that's meant to go along with the Mac Studio. The Studio Display is priced starting at $1,599, making it much more affordable than the Pro Display XDR, but not at the attractive $999 price point of the long-discontinued Thunderbolt Display. Though the base Studio Display is $1,599 for the display itself and an included...
Read Full Article • 223 comments

Monday October 18, 2021 11:11 am PDT by Sami Fathi
Apple's newly announced high-end chip for the new MacBook Pro, the M1 Max, can support up to three Pro Display XDRs and a fourth 4K TV display all at the same time, a significant jump in support compared to the single display support that the M1 chip provided. The M1 Pro chip supports up to two Pro Display XDRs alone, while the higher-end M1 Max chip extends support to an additional Pro...
Read Full Article • 87 comments

Friday July 23, 2021 9:37 am PDT by Juli Clover
Apple is developing an external display that includes an A13 chip with Neural Engine, according to a new rumor from 9to5Mac. The A13 chip with Neural Engine would presumably serve as an eGPU, though details are light at this time. Having a CPU/GPU built into the external display could help Macs deliver high-resolution graphics without using all the resources of the computer's internal chip....
Read Full Article • 237 comments