Apple has temporarily closed all of its stores in the United Kingdom, as England and most of Scotland enter new lockdowns to curb a steep rise in coronavirus cases thought to be caused by a new strain. 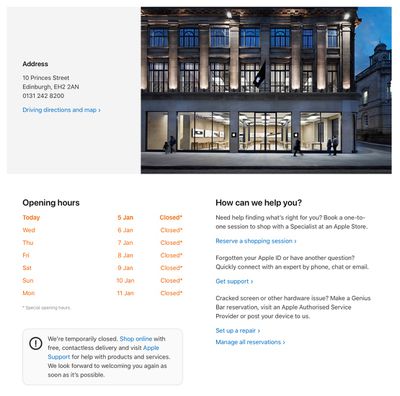 Announced on Monday by U.K. Prime Minister Boris Johnson and Scotland First Minister Nicola Sturgeon, the new lockdowns close all schools and non-essential shops, and mean people must stay indoors other than for limited exceptions, such as essential medical needs, food shopping, exercise, and work that cannot be done at home.

In England, the strict rules are to be enforced until at least mid-February, while in Scotland they apply on the mainland until the end of January, and will be kept under review. Northern Ireland went into lockdown on December 26, while Wales has been in a nationwide lockdown since December 20, so Apple stores there were already closed before the holidays, as noted by 9to5Mac's Michael Steeber.

All 18 UK Apple Stores open today will close from January 5. Includes every location in Scotland. Most of the other 20 stores closed just before the holidays. pic.twitter.com/RYfhWgNkrb — Michael Steeber (@MichaelSteeber) January 4, 2021

With local tiered restrictions in force since early November, many of Apple's retail locations had already been operating on a click-and-collect basis only with Express Pickup. However, the new lockdown rules are the harshest the U.K. has seen since the spring, and all non-essential stores must once again close. The new rules come after the U.K. reported a record 58,784 cases on Monday, as well as a further 407 deaths within 28 days of a positive test.

Update: Apple has informed MacRumors of an update to its holiday returns policy which means customers seeking to return products purchased in-store will still be able to do so whenever the lockdowns end and stores reopen.

As an aside, I understand it's difficult to determine the cause of death sometimes - especially for those who die outside of a hospital or care home - but the UK is counting deaths within 28 days of a positive test (as are many other countries). That includes everyone who tests positive then gets hit by a bus within 28 days. 28 days is an arbitrary number. Could've been 14, 21, 50... The numbers of deaths are arbitrary. Still frighteningly high, but that's the fault of Alexander Boris de Pfeffel Johnson's useless government and ministers.

It may come as a shock to you but doctors arent completely stupid. If someone gets hit by a bus and they had COV19 but die directly from the trauma, like blood loss on scene, the cause of death is the bus, not COV19 (the exception to that could be something like they were hospitalized and stable and then died of respiratory failure because of COV19, where the possible primary cause is COV19 exacerbated by physical trauma, but typically even that will be reported as a trauma death as it's likely the trauma would be viewed as the primary cause).

The right wing talking point you're trying to reiterate, even worse than the original if that's possible, has to do with comorbidities where, yes, someone with, say, COPD who gets COV19 and dies from respiratory failure is a COV19 death. That's because very few people die of any one thing on its own, outside of, say, major trauma (like getting hit by a bus) and the primary cause is the most important part in COV19 reporting. But no one is reporting bus accidents as COV19 deaths, in the UK, in the US, or anywhere else (and I'm sure right wingers will jump on this post with some example of one misreported death, but statistically that's not happening)
Score: 11 Votes (Like | Disagree)

Apple Knowledge Navigator
Look in the bright side - the UK currently has more people vaccinated than all of EU combined. Good job folks!
Score: 9 Votes (Like | Disagree)

As an aside, I understand it's difficult to determine the cause of death sometimes - especially for those who die outside of a hospital or care home - but the UK is counting deaths within 28 days of a positive test (as are many other countries). That includes everyone who tests positive then gets hit by a bus within 28 days. 28 days is an arbitrary number. Could've been 14, 21, 50...

It also excludes anybody who was tested positive then took more than 28 days to die. It is arbitrary but it assuming it is meaningless because it isn't perfect is a mistake. It gives us an indication of the direction of travel.
Score: 8 Votes (Like | Disagree)

Have a look yourself. Mountains of evidence that the lockdowns are not justified. @IvorCummins ('https://twitter.com/fatemperor?s=21')

Rather inefficient for you to suggest that everybody who reads your post goes and duplicates effort finding evidence you already have. Why don't you just share it?
Score: 7 Votes (Like | Disagree)

It’s almost like a series of half-baked ‘tiered’ restrictions were ineffective at both stemming the tide of the virus and protecting businesses. What a shock. This full lockdown should have come before Christmas. Instead, it was apparently better to pander to the “spreading-Covid-is-my-right” brigade, and here we are. Apple will be fine, though. The same may not be true for retail employees and small business owners. Hopefully we can stem the tide until the larger rollout of the vaccines. It’s like the UK and US are in competition for how epically they can fail at their response to a global pandemic. If you have lost friends or family to the virus or have been tangentially impacted by it (e.g. unemployment), you know how frustrating this all is - and depressing, quite frankly. Take care of yourselves and others. ❤️?

UK’s response has been terrible. Too slow and too soft. But the worst thing is not to learn from the previous mistakes. Still it’s better than USA’s outright negligence.
Score: 6 Votes (Like | Disagree)
Read All Comments

Friday December 18, 2020 2:33 pm PST by Juli Clover
Apple is temporarily closing its retail locations in the Los Angeles area due to a rising number of COVID-19 cases in Southern California, reports Bloomberg. Update - Dec. 19: Apple has extended the closures to all stores in California indefinitely. This is the first time in several months that stores in Los Angeles have been closed. Apple has several major retail locations in the area,...
Read Full Article • 232 comments

Sunday December 20, 2020 10:52 am PST by Juli Clover
Apple this weekend shut down all of its stores in California, including those in the San Francisco Bay Area, after beginning to shutter stores in Los Angeles on Friday. All retail locations in California have a notice letting customers know that the stores are temporarily closed, though some are allowing for order pickups and genius bar appointments through December 22. There's no word on...
Read Full Article • 388 comments