Apple device users spent a record $72 billion on the App Store in 2020, a 30% increase on app spending the previous year, according to a new Sensor Tower report. 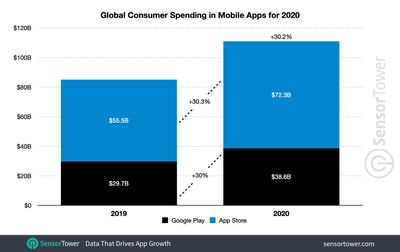 Globally, consumer spending on the App Store reached $72.3 billion, up 30.3 percent Y/Y from $55.5 billion in 2019. As in previous years, this exceeded the amount users spent on Google Play, which grew 30 percent Y/Y from $29.7 billion in 2019 to $38.6 billion. The App Store generated 87.3 percent more in consumer spending than the Play store, and both platforms experienced roughly the same Y/Y growth. The spending gap between the platforms remained relatively flat compared to 2019.

First-time installs also set a new record in 2020, with the ‌App Store‌ and Google Play collectively reaching nearly 143 billion, up 23.7% from approximately 115.5 billion in 2019. This figure is about 14% higher than the year-on-year growth experienced by both stores in the previous year.

The gaming category also reached new heights, generating $79.5 billion last year across both app stores globally. The report notes that this is up 26% from slightly more than $63 billion in 2019, and represents 71.7% of all in-app spending for the year.

According to Sensor Tower data, around $47.6 billion was spent on iOS games in 2020, up 25% in 2019. Games accounted for 66% of all ‌App Store‌ revenue, and the highest grossing game on iOS was Tencent's Honor of Kings.

The report notes that the mobile market experienced "unprecedented growth" in 2020 as the global health crisis dramatically shifted consumer needs and behavior, and could even indicate a permanent change in consumer habits.

Not sure that Apple having an App Store is bad for consumers. Choices...
Score: 4 Votes (Like | Disagree)

Shanghaichica
And I’m guilty of spending between £60-100+ monthly on iTunes purchases and app subscriptions.
Score: 3 Votes (Like | Disagree)

And I’m guilty of spending between £60-100+ monthly on iTunes purchases and app subscriptions.

I haven't spend a dollar on the App Store/iTunes in 10 years of usage. Plenty of free apps for everything I need and I also do listen to music on youtube/dailymotion and similar video services for free.

If you take the average wage in the UK, you are working one full day of each month for Apple and various other companies for paying subscriptions for electronic services, many of which have free alternatives (although less convenient ones). We are talking about two weeks of work (two weeks of your life) per year. Maybe not your case because you are earning a lot more, but still, your spending is what I see many people around me spend also and have always wonders if they make any calculation of annual basis to find what all these small subscriptions actually cost.
Score: 3 Votes (Like | Disagree)

iapplelove
I have not purchased an app in years. What are you all spending your money on lol
Score: 2 Votes (Like | Disagree)

I have not purchased an app in years. What are you all spending your money on lol

I think most of the spending these days are in-app subscriptions and game in-app content, not apps themselves which are mostly free.
Score: 2 Votes (Like | Disagree)
Read All Comments

Friday April 2, 2021 6:47 am PDT by Hartley Charlton
The average iPhone user spent 38 percent more in 2020 on premium apps and in-app purchases than the year before, reaching a total average spend of $138 per iPhone in the United States, according to new research conducted by Sensor Tower. 2020 was a record year for App Store spending, with more than ever being spent per iPhone user. Although App Store sales grew by 42 percent in 2016, the 38...
Read Full Article • 92 comments

Friday March 25, 2022 4:46 am PDT by Tim Hardwick
European lawmakers have provisionally agreed upon a new law that would force Apple to allow user access to third-party app stores and permit the sideloading of apps on iPhones and iPads, among other sweeping changes designed to make the digital sector fairer and more competitive. The European Council and European Parliament said on Friday they had reached a political agreement on the...
Read Full Article • 575 comments

Tuesday January 18, 2022 6:18 am PST by Sami Fathi
Microsoft today announced that it will purchase the game studio Activision Blizzard, the maker of hit games such as Call of Duty, Candy Crush, World of Warcraft, and more, for almost $70 billion. Microsoft says this purchase will help it "bring the joy and community of gaming to everyone, across every device." The seismic purchase for Microsoft will see several of Activision's games move to...
Read Full Article • 428 comments