Apple yesterday introduced a new ProRAW format that's available on the iPhone 12 Pro and iPhone 12 Pro Max, allowing pro photographers to have more control over their images without losing the benefits of Apple's computational photography software. 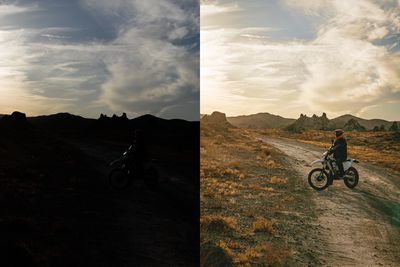 An image with ProRAW and without, from Halide
Ben Sandofsky, one of the developers behind popular camera app Halide, did a deep dive into ProRAW to explain how the feature works. ProRAW, says Sandofsky, is about making RAW a more approachable format, and he believes that it could change how beginners and experts alike shoot and edit photos.

A standard RAW photo includes no processing so that people can make edits on their own and tailor an image to personal preference. It's great on DSLRs, but on iPhones, there's so much going on behind the scenes that a standard RAW was never going to be an option.

As Sandofsky explains, iPhones have a lot of computational tricks going on behind the scenes. For many shots, iPhones take several photos and then combine them all into one to make the best possible image, none of which works with a RAW file. Standard RAW modes in third-party camera apps were also not able to work with all of the iPhone cameras.

That's why ProRAW is a great step forward. It keeps the behind-the-scenes magic that the iPhones do when capturing a photo, but gives photographers control over white balance, noise control, and more by storing computational photography inside the RAW format. Plus ProRAW works with the front-facing camera and all of the rear cameras on the ‌iPhone 12‌ Pro and Pro Max.

ProRAW preserves Smart HDR info, Deep Fusion, and Apple's depth detection functionality, all of which goes into making ‌iPhone‌ photos look the way they do through software enhancements.

Apple worked with Adobe to introduce a new type of tag into the DNG standard, called a "Profile Gain Table Map." This data gives your editor everything it needs to know to tone map your photo image and end up with results identical to the first party camera. Because it's separate data, you can turn down its strength, turn it off completely.

Sandofsky also points out the RAW editing functionality that's been added in iOS 14.3, iPadOS 14.3, and macOS Big Sur 11.1, making it much easier to work with ProRAW photos. Casual users who don't often deal with RAW files will be able to use Apple's tools.

The most underrated improvement in iOS 14.3 is that the native Photos app now supports RAW editing. This is huge, because it abstracts away all the complexity of higher-end apps. No fiddling with "black point" and "color profiles." Casual users who only know how to edit photos in the built-in apps don't have to do anything different. It just works.

ProRAW does have a few downsides, such as working on the Pro iPhones only and slower processing times, plus it doesn't work with Burst Mode nor can ProRAW photos be shared as is on social networks at this time. It still lags behind traditional RAW files in terms of sharpness and noise reduction, according to Sandofsky, and the file size is around 25MB, which is going to eat up storage space fast.

The Halide app has been updated with ProRAW support, and the app features a new ProRAW+ mode that captures a ProRAW image and a JPG for simple sharing. There are options to toggle between the standard RAW format and ProRAW, along with a few other benefits for Halide users.

The full post from Halide's developers delves further into the benefits of ProRAW with a full explanation of how a digital camera works and how ProRAW is different than a traditional RAW, and it's well worth reading for those who want to learn more about Apple's newest photography feature.

Yes, the Apple Card on the Wallet App.
Score: 25 Votes (Like | Disagree)

I often wonder how Mathew Brady or Ansel Adams would react to today's photography technology.

Ansel Adams could make great art with a pinhole camera. He was an artist who chose photography as his medium. Today's technology would only expand his palette. He would be great in any era.
Score: 12 Votes (Like | Disagree)

I've been quite happy with Adobe Lightroom mobile's uncompressed DNG images, and even more so with the HDR DNG's it can produce. It works on a broad range of iPhones too. iPhone 6s and original SE or newer. A nice option you can turn on is to have the app save the middle exposure, single shot DNG alongside the HDR version— useful if there's a lot of motion happening. The app used to remember all my settings, but these days I find I have to continually remind it I like shooting a stop under... but other than that, it's pretty great. Since I throw some money at Adobe every month, every shot I shoot with the LR Mobile app syncs back to my Lightroom Classic library on my desktop Mac (that I don't let sleep), so if I really want to spend some time futzing with levels and such on a right proper large screen, I can get to it as soon as I'm back home. Oh, and there's a lock screen widget for LR Mobile too, so I can get to the LR camera nearly as fast as the native camera.

All that being said, I do wish Apple would bring ProRAW to my shiny new 12 mini... and wouldn't be at all surprised if they somehow "figured out" how to do it with two gigs less RAM in iOS 15.

Here's an uncompressed (and un-futzed with) HDR image and it's single shot DNG sibling I shot on my 2016 iPhone SE three years ago.

it's a differentiator ... it would work but it's marketing ...

I wish it would be available on my 11 Pro max, don't see why it would be technically not possible nor requires that much CPU, but, its marketing. And as a hobby photographer, with my DSLR, I only shoot in RAW so I can appreciate the advantages ...


According to the Halide article, the difference is actually the amount of RAM required. Pro models have double that of the non-pro.

I often wonder how Mathew Brady or Ansel Adams would react to today's photography technology.

Not sure what you are suggesting here, Adams manipulated his shots in the darkroom with every trick he could think of, he would have loved current technology if you ask me.
Score: 4 Votes (Like | Disagree)

it's a differentiator ... it would work but it's marketing ...

I wish it would be available on my 11 Pro max, don't see why it would be technically not possible nor requires that much CPU, but, its marketing. And as a hobby photographer, with my DSLR, I only shoot in RAW so I can appreciate the advantages ...

If I am gonna be shooting raw etc.. thats when I break out my DSLR. I shoot with the phone when I just want to take snapshots etc.. nothing that requires high technical requirements.

But even without using raw what you get out of,phones is quite impressive.
Score: 4 Votes (Like | Disagree)
Read All Comments