Apple recently shared a list of popular apps optimized for Macs with the M1 chip that are available in the Mac App Store, such as Pixelmator Pro, Adobe Lightroom, Affinity Designer, Darkroom, Fantastical, BBEdit, Instapaper, and Twitter. 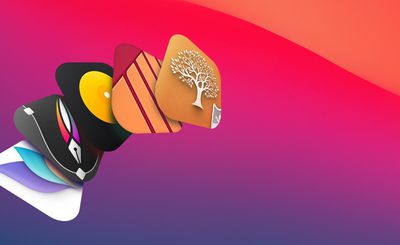 "Macs with the new Apple M1 chip offer unprecedented performance, and developers can optimize their apps for the M1 to deliver game-changing speed and capabilities," says Apple. "Get started with these apps that take full advantage of the power of M1."

MacRumors also has a crowdsourced list of apps that run natively on Apple Silicon Macs, including apps available outside of the Mac App Store.

At WWDC 2020 in June, Apple revealed its plans to begin using its own custom Apple Silicon processors in Macs, starting with the M1 chip. Apple said that its transition away from Intel processors in Macs would take around two years to be completed, with future Apple Silicon Macs rumored to include redesigned 14-inch and 16-inch MacBook Pro models, a 24-inch iMac, a smaller version of the Mac Pro, and more.

Last month, Apple released its first Macs with the M1 chip, including a new 13-inch MacBook Pro, MacBook Air, and Mac mini, and benchmarks confirmed that the chip delivers industry-leading performance per watt. Apple's custom silicon is so impressive that the base model MacBook Air outperforms a maxed-out Intel-based 16-inch MacBook Pro.

The more apps that get updated the better.

The sun rises in the East and sets in the West.
Score: 8 Votes (Like | Disagree)

Cool. You're a developer yourself?

omenatarhuri
For most apps it’s ridiculously easy. Just recompile and that’s it. Apple has done a phenomenal job with this CPU transition. ?
Score: 7 Votes (Like | Disagree)

Not a programmer, but is there a difference between an app that was Intel and "just recompiled" and one that was written for M1 explicitly? Would the latter perform even better?

Depends on what you're developing. Lots of apps get written at a higher abstraction level where you are defining what the app looks like and what it does (the conditional business logic). It's not all too common that you would really need to write anything that is so close to the hardware where you'd do something differently based on the CPU architecture (how the machine should do what you want it to do).

Apps that would do that would be those where getting peak performance is critical, apps like games or some heavy-duty video editing I suppose or the likes. But I'd be surprised if there's anything like that in some of the apps on the list e.g. in Twitter, BBEdit or Fantastical.

Please note that I'm not contradicting what is said up there, these apps are now "optimised for M1". The fact that it can be done simply by recompiling is great and makes many devs life easy.
Score: 7 Votes (Like | Disagree)

The more apps that get updated the better.

ct2k7
The more apps that get updated the better.
Score: 3 Votes (Like | Disagree)
Read All Comments