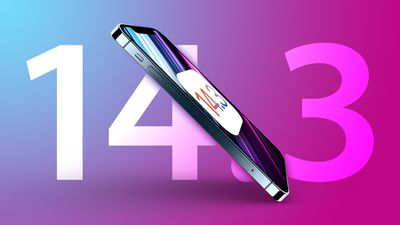 Ecosia, a search engine that plants trees when people conduct searches, can now be set as the default search engine on iPhone and iPad, and the update adds support for the AirPods Max headphones that were announced today.

Code in iOS 14.3 suggests Apple is laying the groundwork to add support for third-party item trackers and Bluetooth devices in the Find My app, allowing these devices to be tracked right alongside iPhones and iPads.

Other new features include pregnancy data in the Health app, third-party app suggestions at setup in certain countries, support for scanning App Clips QR codes with the camera app, an option to update HomeKit products with the Home app, and more, with Apple's full release notes below.

TV app
- An all-new Apple TV+ tab makes it easy to discover and watch Apple Original shows and movies
- Enhanced search so you can browse by category such as genre, and see recent searches and suggestions as you type
- Top search results shown with the most relevant matches across movies, TV shows, cast, channels, and sports

Health
- Ability to indicate pregnancy, lactation, or contraceptive use in Cycle Tracking in the Health app in order to better manage period and fertile window predictions

This release also addresses the following issues:
- Some MMS messages may not be received
- Contact groups failed to display members when composing a message
- Some videos would not appear correctly when shared from the Photos app
- App folders may fail to open
- Spotlight search results, and opening apps from Spotlight may not work
- Bluetooth could be unavailable in Settings
- MagSafe Duo Charger could wirelessly charge your iPhone at less than the maximum power
- Wireless accessories and peripherals using the WAC protocol could fail to complete setup
- The keyboard would dismiss when adding a list in Reminders while using VoiceOver

movieator
So can we get text message notifications to wake the lock screen now?
Score: 12 Votes (Like | Disagree)

GadgetBen
They mention weather updates, come on Apple make Dark Sky the default weather app. It's been months since you bought it.
Score: 11 Votes (Like | Disagree)

They mention weather updates, come on Apple make Dark Sky the default weather app. It's been months since you bought it.

They mention weather updates, come on Apple make Dark Sky the default weather app. It's been months since you bought it.

They already added some Dark Sky content to the main weather app, the hyperlocal precipitation forecast in particular. My guess is they're doing it slowly; remember, people tend to not like sudden change!
Score: 6 Votes (Like | Disagree)

For many people, wi-fi and mobile data have been unreliable since iOS 14 first came out. Pathetic.
Score: 2 Votes (Like | Disagree)
Read All Comments