Apple began working on its recently unveiled AirPods Max headphones over four years ago, according to tweets by a former Apple engineer. 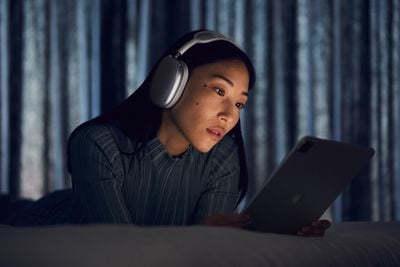 However, the timeline of their development apparently extended much further than that, based on now-deleted tweets by former Apple engineer Dinesh Dave (@appleidinesh).

Weather Line developer Ryan Jones screenshotted images of the tweets and shared them, so there's a record after they were removed. In the tweets, Dave linked to Apple's AirPods Max announcement and claimed that "the last product NDA I signed is finally out!"

Responding to another Twitter user who asked when the NDA was signed, Dave replied: "~4 years."

Apple first launched the AirPods line almost exactly four years ago, in December 2016, after which their popularity grew rapidly. As Jones notes in his tweet, Apple likely saw the "insane demand" for AirPods and decided to explore additional potential products in the now-vast "hearables" category.

Prior to their official announcement on Tuesday, subsequent rumors about the headphones focused not only on design and features, but also protracted delays that Apple was said to be experiencing in production. Rumors predicted various launch dates for the headphones that continually missed their mark, from launching in late 2018 to sometime in the second half of 2019.

‌AirPods Max‌ are now available to pre-order on Apple's website, with a launch date of December 15, although there are already massive wait times for shipping running into March 2021.

Bloomberg's Mark Gurman previously reported that Apple tested at least two versions of the headphones, including a "premium version with leather-like fabrics" – aka ‌AirPods Max‌ – and a "fitness-focused model that uses lighter, breathable materials with small perforations," so we may well see an additional version of the headphones sometime next year.

That's assuming this competes with the $250 - $350 headphones and not the $500 - $1000 headphones. We don't know where they are supposed to compete (and maybe Apple doesn't know) but it's too soon to know if these are overpriced and destined for a quiet demise like the Power Mac G4 Cube or the Gold Apple Watch Edition or are priced high but fairly given their performance (like the Pro Display XDR).

Note: I'm not going to buy them. I don't spend hundreds of dollars on headphones (I have a set of AirPods Pro but I only paid $90 for them new [not a reproducible deal]). That being said, if Apple wants to sell $550 headphones and people want to buy them, what does that matter to me? I'm not going to judge how people spend their money; I only need to worry about how I spend mine.
Score: 28 Votes (Like | Disagree)

swingerofbirch
4 years to scrub off the Beats logo.
Score: 23 Votes (Like | Disagree)

Enough fools to push the delivery times into March 2020. Longest I can recall of any Apple product.

Sounds like the rumors of production issues were real and supply is severely constrained.
Score: 16 Votes (Like | Disagree)