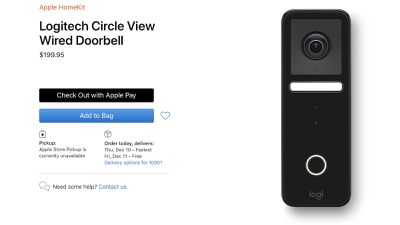 ‌HomeKit Secure Video‌ also gives you private video analysis that occurs directly on your Apple device rather than on cloud servers, as well as full encryption before anything is sent to ‌iCloud‌. It also integrates with people tags from the Photos app in order to identify who is at your door.

The Logitech Circle View Wired Doorbell is priced at $199.95 and is available now from the Apple online store.

This appears to use WiFi, not PoE, and is therefore not a “wired” doorbell.

Yes its a "wired" doorbell because it uses existing low voltage doorbell wiring for power instead of a battery. This is the same phrasing used across the entire video doorbell market.
Score: 19 Votes (Like | Disagree)

Did you even read the specs on Logitech’s website? No, you didn’t. WiFi. That’s not wired. That’s wireless.

when referring to smart home products like cameras and doorbells, wired or wireless refers to power delivery. Not data. These smart home products from Logitech, eufy, arlo, netatmo, nest, abode, simplisafe, wyze, aqara, vocolinc and so on all transfer data over wireless. But are only called wireless if they use batteries. And called wired if they plug in an electrical outlet. This isn't anything new.

POE cameras are something else entirely. I'm not aware of any POE cameras in the smart home space that these other products occupy. Though I could be wrong.
Score: 8 Votes (Like | Disagree)

xyz01
If only they had a wireless version, I'd order one asap. My Ring is getting old, and for privacy reasons is rather get something else the next time.
Score: 6 Votes (Like | Disagree)

Same here, could not wait to get rid of subscription Nest plan, was down to just that door bell..
Score: 5 Votes (Like | Disagree)
Read All Comments

Wednesday November 10, 2021 11:07 am PST by Juli Clover
Apple today introduced a major update to iCloud for Windows, bringing the version number for the software to 13. Apple has added support for Apple ProRes videos and Apple ProRAW photos, so files in these formats can now be accessed from Windows PCs via iCloud. All participants of an iCloud Drive shared file or folder are now also able to add or remove people, and Apple has introduced support ...
Read Full Article • 106 comments