Apple is continuing work on developing some kind of autonomous vehicle product, and the project is under new leadership. Apple artificial intelligence lead John Giannandrea is now overseeing Apple Car development as prior lead Bob Mansfield has retired, reports Bloomberg. 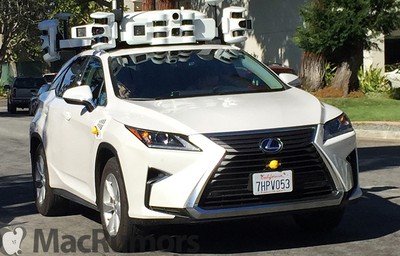 One of the self-driving vehicles Apple uses to test its autonomous driving software
It's been quite some time since we heard news about the ‌Apple Car‌, but Project Titan as the car development is known is now in the hands of Giannandrea, though day to day operations continue to be overseen by Doug Field.

Field was reporting to Bob Mansfield, who came out of retirement in 2016 to handle the ‌Apple Car‌ project. Mansfield first retired in June 2012, but ultimately remained at Apple as an advisor. Prior to being led by Mansfield, Apple's senior vice president of hardware engineering Dan Riccio was overseeing work on the ‌Apple Car‌.

Apple has been working on some kind of self-driving car technology since 2014, but development has been stymied by technical and leadership challenges. Apple was originally working on a full car, but focus seems to have shifted to an in-car autonomous driving system. Apple continues to have dozens of self-driving test vehicles out on the road.

Back in 2017, Apple CEO Tim Cook confirmed that Apple is working on autonomous driving software. "We're focusing on autonomous systems. It's a core technology that we view as very important. We sort of see it as the mother of all AI projects. It's probably one of the most difficult AI projects actually to work on," he said.

mcfrazieriv
My hope for this project has run dry. It was interesting back when Tesla was the only viable EV. Now you have literally every manufacturer coming out with a vehicle with decades of experience in production. BMW, Mercedes, Porsche, Ford, Caddy, Hummer, Rivian, Lexus, etc.

Will the Apple Car use the Digital Crown as a steering wheel? "Made 100% of recycled aluminum and powered by Siri"

dannyyankou
You mean the guy responsible for Siri? Nooooooooooo!!!!!!!!
Score: 18 Votes (Like | Disagree)

JosephAW
When they finally release a car it will be priced like their new headphones with three more zeros added to the price and Mr Cook will say this is a car for the average citizen. :p
Score: 10 Votes (Like | Disagree)

filchermcurr
God help us if autonomous vehicles are powered by Siri.

"HEY SIRI, EMERGENCY STOP!"
"Your car is not connected to the internet."

Or your phone or watch catches it and fails to pass it off to the car. "I'm sorry, I can only do that in Apple Car."
Score: 9 Votes (Like | Disagree)

My hope for this project has run dry. It was interesting back when Tesla was the only viable EV. Now you have literally every manufacturer coming out with a vehicle with decades of experience in production. BMW, Mercedes, Porsche, Ford, Caddy, Hummer, Rivian, Lexus, etc.

You are mixing up electric vehicles (EV) with autonomous driving. They are two separate technologies.

Electric vehicles have been around for quite a while, the most notable ones being the Ford EV1 (modeled after the Probe) and Toyota's RAV4 EV way back from the Nineties.

Note that almost all of the companies researching autonomous driving start in gasoline-powered vehicles.

This includes Google/Waymo and Apple who have both used the Chrysler Pacifica minivan for autonomous driving research.

There are probably thirty companies with autonomous driving research teams in the north Santa Clara County area, so of which are the major auto manufacturers and a bunch of startups including ones that have been acquired by larger companies (driveAI is one notable acquired startup).

There are tons of test vehicles on the local roads, some of which are clearly marked by the developing company, plenty of others are in stealth mode.

Note that this seems to include motorcycle manufacturers. There was a Ducati office in a nondescript Silicon Valley office park very close to where I live. This was not a sales office.
Score: 8 Votes (Like | Disagree)

nt5672
Can't wait for AI updates that break the car for 2+ weeks until they are fixed. Apple has way too many software problems to be serious about AI and driving.
Score: 5 Votes (Like | Disagree)
Read All Comments

Wednesday May 5, 2021 11:03 am PDT by Juli Clover
As the Epic Games v. Apple trial progresses into its third day, Apple's internal documents and communications with various companies are continuing to surface, giving us some insight into the dealings that Apple has had around the App Store. Back in December 2018, Netflix stopped offering in-app subscription options for new or resubscribing members and instead began requiring them to sign up ...
Read Full Article • 423 comments