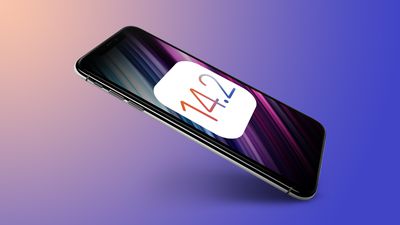 Symptoms of the problem include rapid battery drain and longer charge times than usual. Some users are reporting that their devices are losing over 50 percent charge in less than 30 minutes, and seeing large drops of around five percent within minutes of normal use.

The issue seems to be software-related because multiple users are experiencing battery life sticking at a high percentage before dropping, as well as seeing a sudden gain in battery life after restarting their device.

The affected iPhones all appear to be slightly older, such as the iPhone XS, iPhone 7, iPhone 6S, and first-generation iPhone SE. The 2018 iPad Pro running iPadOS 14.2 also seems to be affected.

iOS 14.2 and iPadOS 14.2 arrived just two weeks after iOS 14.1 and iPadOS 14.1, in the second major updates to the iOS and iPadOS 14 operating systems that were released in September. The update included new emojis, Intercom, AirPods Optimized Battery Charging, People Detection, and new wallpapers.

There are no new reports suggesting that the battery issue was fixed in iOS 14.2.1, which sought to address bugs with MMS messages, made for iPhone hearing devices, and a significant issue with screen responsiveness on the iPhone 12 mini.

The third developer and public betas of iOS 14.3 and iPadOS 14.3 have already been released, so it is possible that Apple may fix the problem in that update. The third major update to iOS 14 and iPadOS 14 brings support for Apple ProRAW, as well as refinements to Home, Health, and Weather.

Users with older devices may wish to hold off on updating to iOS 14.2 if they have not already done so, until the issue has been fixed by Apple.

So if someone says they're not having an issue that makes their post immature? Seriously? You're lookin at this in a very shortsighted view. Firstly it doesn't do anyone any good (other than Apple haters) to hear only negative responses or from people who are only having problems. That puts out a false message saying that the issue is widespread when often it's not. It's important that people without issues post so others with issues can narrow down the problem. I could also be certain apps that are draining the battery, or a dozen more reasons but negative-only posts are not helpful.

thomamon
I am glad you are finally reporting on this. There has been a thread on your forum about people with the 12 Max Pro experiencing the same thing. Leaving my phone on my dresser over night, in DND I am losing over 20% tonight!
Score: 9 Votes (Like | Disagree)

What I mean is that it’s causing the battery readings to go crazy. All the way back to the iPhone 4s I’ve had this issue, it could be 20 degrees outside and the percentage would suddenly drop dramatically or the phone would turn off, and when I turn it back on it would jump back up.
Score: 7 Votes (Like | Disagree)

macfacts
So why doesn't apple allow downgrading at a store

Surprising they aren’t finding these bugs during the beta period. Then again my iPhone 6S Plus Pro Max isn’t having these issues, maybe it’s related to a handful of 3rd party apps?

It still surprises me how a company as big as apple can release software which has so many bugs.
Score: 6 Votes (Like | Disagree)
Read All Comments