Spotify has started publicly testing an Instagram-style stories feature in its mobile app on iOS and Android, reports Engadget. 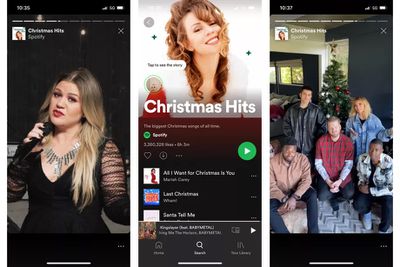 The video clips appear on some albums and playlists, such as Spotify's Christmas Hits playlist, which includes short messages from artists like Jennifer Lopez, Kelly Clarkson, and Pentatonix, in which they relate their favorite festive songs.

The stories can be accessed via an icon in the upper left of a playlist. Tapping an icon brings up an interface similar to the one found on Instagram, allowing users to tap on the left or right of the screen to skip through short video clips.

First appearing on Snapchat, stories have become ubiquitous on social media platforms, with the format appearing on Instagram, Facebook, YouTube, LinkedIn, and most recently, Twitter, in the form of "fleets." Spotify might therefore seem like an odd place for the feature to appear, however the streaming service has tested Stories-style content in the past, with similar Storylines from artists appearing last year.

Spotify stories aren't showing up for everyone and only appear on certain playlists and albums, indicating that their rollout is still limited to a subset of users and they may not even survive beyond the initial testing phase.

"At Spotify, we routinely conduct a number of tests in an effort to improve our user experience," a spokesperson told Engadget in response to a request for comment. "Some of those tests end up paving the path for our broader user experience and others serve only as an important learning. We have no further news to share on future plans at this time."

MHenr
This trend has to stop. I don't want to check stories in every freakin' app.
Score: 20 Votes (Like | Disagree)

helloplebies
ugh, what's next? the settings app? I know, how about the compass?!
Score: 13 Votes (Like | Disagree)

joel8x
Imagine being one the developers of SnapChat and you have to read articles about “Instagram-Style Stories” on a tech blog.
Score: 13 Votes (Like | Disagree)