The availability of HomePod mini is now at its lowest since Apple's new smart speaker went on sale last month, with shipping times across Europe having already slipped into next year in many cases. 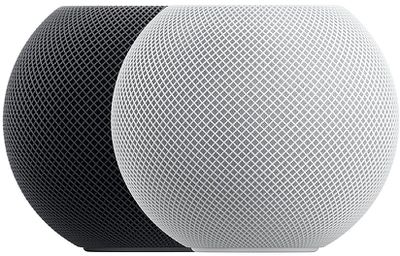 In the United Kingdom, France, and Spain, for example, the delivery time for a ‌HomePod mini‌ ordered today in either space gray or white is as long as five to six weeks, and in Germany has even slipped to between six and seven weeks, taking shipping into mid-January.

In fact, with the exception of the U.S. and India, global stocks of ‌HomePod mini‌ are so low right now that anyone seeking to have one shipped for a holiday gift and who has yet to get their order in is very likely going to be disappointed.

Wait times in the Asia Pacific region are less consistently pronounced but still relatively long, with ‌HomePod mini‌ shipping times in the first wave of launching countries, Hong Kong, Japan and Australia, ranging between four and six weeks. As mentioned, one exception in Asia is India, where customers can have either color of ‌HomePod mini‌ shipped to their door in seven to 10 business days.

In Canada, the space gray model takes four to five weeks to arrive when an order is placed today, but the wait time for the white ‌HomePod mini‌ is five to six weeks. Apple's home base in the United States remains the best place to still pick up one of the speakers for the holiday season, with delivery times in the region of two to four weeks, depending on color choice.

Meanwhile, in-store pickup options vary from country to country, but remain the best chance to get a ‌HomePod mini‌ or two before the holiday break. In many countries, ‌HomePod mini‌ orders are limited to two per customer.

Costing $349 at launch, the original 2018 HomePod was considered by many to be too expensive compared to rival products and it failed to capture a significant portion of the smart speaker market. To improve sales, Apple in 2019 cut the price of the ‌HomePod‌ to $299, and still sells the device alongside its smaller $99 siblings, which appear already to be on a more positive track, based on their initial reception.

I have one. It's not worth it.

I really like it, think it’s got great sound for its size, this should have been the first HomePod they released though, with the bigger one coming later down the line.
Score: 19 Votes (Like | Disagree)

ArmPol
I have one (and a full size HomePod), I think the sound is amazing for it's size, in a room 7m x 4m, and am very happy. Not surprised these are selling so fast.
Score: 8 Votes (Like | Disagree)

I ordered in Germany 25 minutes after release, I've yet to receive it. It's supposedly to be delivered on the 15 december.

I ordered in Germany 25 minutes after release, I've yet to receive it. It's supposedly to be delivered on the 15 december.

All that waiting and they are probably a load of crap anyway.

As far as i can tell from searching online they have that boxed in sound just like the original HomePod, no tone or treble, just loads of base.

So what you’re really saying, is you’re projecting your opinion on the Mini that you have no absolutely no experience with, other “than a load of crap”. I wouldn’t take your post into consideration whatsoever and holds no value.
Score: 5 Votes (Like | Disagree)

m4mario
I tested out one in the store. Surprising how loud it can get without distorting. How ever, don't expect great sound from it like the HomePod. It's just surprisingly good for its size.
Score: 5 Votes (Like | Disagree)

*except most of Europe
Score: 5 Votes (Like | Disagree)
Read All Comments