iFixit today shared a teardown overview of the new MacBook Air and MacBook Pro, giving us a peek at what's under the hood. For the most part, these machines look the same as older Intel MacBooks inside, but there are a few highlights. 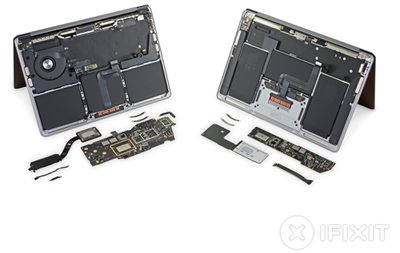 The removal of the fan is the biggest change to the ‌MacBook Air‌, with the fan having been replaced by an aluminum spreader located to the left of the logic board.

A thick cold plate over the M1 processor draws heat via conduction to its flatter, cooler end, where it can safely radiate away. Without a fan, this solution may take longer to cool off, and may cap out sooner, but by foregoing heatpipes or a vapor chamber, the sink also has more mass to saturate with thermal energy. There are no moving parts, and nothing to break.

Aside from a new logic board and cooler, the inside of the ‌MacBook Air‌ is identical to its predecessor, and iFixit says that repair procedures "will likely remain almost totally unchanged."

As for the MacBook Pro, it's so similar to the prior model that iFixit had to double check to make sure an old MacBook Pro hadn't been accidentally purchased.

iFixit expected to see some consolidation of MacBook parts and design, but the cooling setup is similar to what's seen in Intel MacBook models. The fan, in fact, is identical to the fan in the 2020 13-inch MacBook Pro released earlier this year.

While the internals of the ‌MacBook Air‌ and MacBook Pro are close to identical to their Intel counterparts, iFixit did take a look at the all-new M1 chip, which is the shiny silver bit with an Apple logo. Next to the chip, there are small silicon rectangles that are Apple's integrated memory chips.

iFixit says the integrated memory is "slightly devastating" because it makes repairs on the ‌M1‌ Macs much harder. Note that there's no Apple-designed T2 chip in the ‌M1‌ Mac models because the T2 security functionality is integrated right into the ‌M1‌ chip.

iFixit says that while these seem like superficial changes, they're an expression of "years of intense work" with "hints of a lot more to come in the future." Head over to iFixit to read the full teardown.

ghanwani
why do they say the macbook air is fanless? i'm still a fan.
Score: 38 Votes (Like | Disagree)

why do they say the macbook air is fanless? i'm still a fan.

jz0309
what has been said before: only change what is absolutely necessary to avoid introducing more variables that can cause issues - makes total sense that they are so similar, old and new, in this first generation ...
Score: 9 Votes (Like | Disagree)

And I'm wondering how big the actual die of the M1 is? Who does the chip teardown?

Right. Because you have to look at the CPU every day? :)
Score: 8 Votes (Like | Disagree)

Saturnine
I remember a certain YouTube channel with the initials “LTT” speculating a long time ago that the internals of newer MacBook Pro’s seemed to be designed for a possible Apple chip as the cooling seemed insufficient for the Intel chips installed.

That does appear to have some merit given how few changes Apple have had to make to integrate the M1.
Score: 7 Votes (Like | Disagree)
Read All Comments