Apple Donating 2,500 Devices to Boys and Girls Clubs Across the U.S.

Apple today issued a press release highlighting its partnership with Boys and Girls Clubs, looking in particular at how the Atlantic City club has integrated Apple programs and technologies. 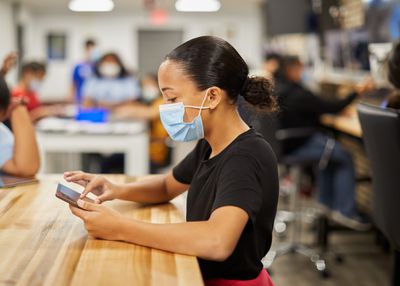 Apple is aiding a new set of technology labs created by the Boys and Girls Club as part of its 21st Century Academic Enrichment Program by providing a large number of iPad and Mac devices. The labs, which focus on science, technology, engineering, art, and math, as well as design and career training, also include Apple's Everyone Can Code, Everyone Can Create, and Develop in Swift programs.

The company has set out its commitment to work with local clubs to help them explore the full potential of its devices, and show them how they can further integrate Apple coding and creativity programming into their curricula.

Tags: Education, Everyone Can Code, Develop in Swift
[ 12 comments ]

I only got foosball, basketball, and maybe painting when I went in the 80s lol. Good to see they are supporting outlets like the B&GC.

Hehehe I was thinking something along the lines.

By the way, we need a club like this for adults, bring them Macs for free!

Great way to get rid of old inventory.

And I would gladly take it if it was offered to me... I prefer to see the positive on this move.
Score: 4 Votes (Like | Disagree)

triton100
That’s right. Hook em in when they’re young Apple, the first is always free, after the hook up, you got em for life mwahahaha (dr evil laugh) ;)
Score: 3 Votes (Like | Disagree)

AirunJae
Love this! The Boys and Girls Club is such a great place for kids, glad to see Apple giving support like this. My Eagle Scout project was raising money to buy computers for the local B&GC, so I really vibe with this.
Score: 3 Votes (Like | Disagree)

citysnaps
And the race is on to see who can conjure up the best ulterior motive for Apple's philanthropy. I guess that makes some people happy. For an hour or so, anyway.
Score: 2 Votes (Like | Disagree)

laz232
Yep, what kids need now is more time in front of screens :-s Don't get me wrong, I loved screens as a kid in the 80s, but I'm glad that it wasn't my entire existence - I had physical toys as well...

"The labs, which focus on science, technology, engineering, art, and math, as well as design and career training, also include Apple's Everyone Can Code, Everyone Can Create, and Develop in Swift programs."

so... basically everything except actual face-to-face social interaction. Instead we will teach kids that the best form of expression is my emojies and 140character tweets.

If there is one thing that has undermined society this decade it has been decreasing meaningful, long form social interactions in lieu of quick shots of low quality content.

H00513R
I only got foosball, basketball, and maybe painting when I went in the 80s lol. Good to see they are supporting outlets like the B&GC.
Score: 1 Votes (Like | Disagree)
Read All Comments

Sunday February 5, 2023 6:06 am PST by Hartley Charlton
A new version of the Mac Studio with the "M2 Ultra" chip is unlikely to arrive in the near future, according to Bloomberg's Mark Gurman. In the latest edition of his "Power On" newsletter, Gurman explained that since the upcoming Apple silicon Mac Pro is "very similar in functionality to the Mac Studio," Apple may wait until the release of M3- or M4-series chips to update the machine, or...
Read Full Article • 493 comments