PSA: You Can't Output Mac System Audio to Stereo-Paired HomePod Minis, But There Is a Workaround

If you were thinking of buying two HomePod mini speakers to use as a stereo pair with your Mac, you might want to think again. As some users undoubtedly found with the original HomePod, it's not possible to AirPlay to multiple speakers from the menu bar on a Mac. 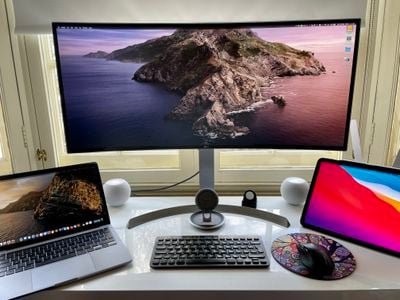 The inability to select stereo-paired ‌HomePod‌ speakers as your Mac audio output device is a glaring omission in Apple's ‌AirPlay‌ rollout, and the situation unfortunately remains the same in macOS 11 Big Sur. You can only use them with certain Apple apps like Music and TV – all other Mac audio must be output to one speaker or the other, but not both at the same time.

While it's frustrating that Apple's own apps let users select stereo-paired HomePods as a single device, this does provide a workaround, although it's a kludge that has its drawbacks. The following steps show you how it's done.

As for the caveats to this workaround, using it means you can only change the volume by tapping the physical ‌HomePod‌ controls themselves – you won't be able to adjust it from your Mac's menu bar. You also have to keep the Music app open at all times, otherwise you'll lose your audio and you'll have to repeat the steps.

Another thing to consider is that this is only ‌AirPlay‌ 1, so there's a delay in the sound output between playing/pausing, and audio will be slightly out of sync when watching videos, although checking the Drift Correction option (circled in green above) in the Audio MIDI Setup app can compensate for this.

As mentioned, the solution is far from ideal, but until Apple brings system-wide ‌AirPlay‌ 2 support to Macs, it's the only way to pipe your Mac's audio through stereo-paired HomePods, short of purchasing a third-party app like Airfoil.

Update: As MacRumors reader B4rbelith points out, if you play something in the Music app, you can then right-click AirPlay in the Audio MIDI Setup app's sidebar and select Use this device for sound output. This lets you control the volume from the menu bar, but the other caveats still apply.

GadgetBen
This is ridiculous, come on Apple sort it out.
Score: 39 Votes (Like | Disagree)

hellosil
Baffled by the fact that this needs a workaround to work.

I actually have two Homepods (not the Mini kind) and Big Sur still doesn't support sending audio to them when they're grouped, just one or the other. So lame.
Score: 11 Votes (Like | Disagree)

B4rbelith
You don't need to create an aggregate device. Just play something from Apple Music to your stereo HomePods, then open 'Audio Devices', right click on Airplay, and select 'Use this device for sound output'.
It's not ideal, and media players like IINA and VLC lag. Youtube through Safari works fine though, as it buffers the video to keep in time.

Latency. All your system sounds and time critical audio would be 3-4 seconds out time. Not an enjoyable experience.

But that's only a problem because they chose that to be a problem.

The HomePod has Bluetooth. Bluetooth can transfer sound with a reasonable latency. They just didn't implement it.
Also they could have just added a line-in. (With USB-C in the mini they could still do it with a custom cable or power brick.)

So the question stands: What's the reason they didn't do it?
Score: 9 Votes (Like | Disagree)

foobarbaz
We don't need cables anymore, we can do everything over the air! ;)
Score: 7 Votes (Like | Disagree)
Read All Comments