Following its iPhone 12 and 12 Pro teardowns, iFixit has shared its teardown of the iPhone 12 mini, providing a look at the similarities and differences between the small form factor smartphone and its larger siblings in Apple's iPhone 12 series. 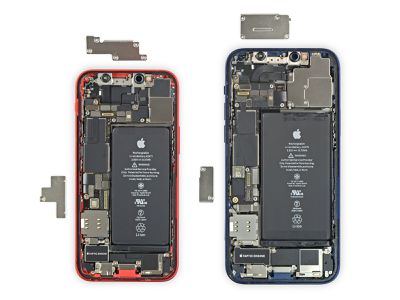 The teardown also reveals that Apple has included some iPhone 12 components in the iPhone 12 mini but in smaller versions to save space, including the Taptic Engine, speakers, and MagSafe ring. The cameras, on the other hand, are the same ƒ/1.6 wide-angle and ƒ/2.4 ultra wide-angle cameras found in the iPhone 12. The wide-angle module also features optical image stabilization.

Elsewhere, Apple does away with the plastic spacers found in the iPhone 12 due to the close quarters inside the camera shield, but otherwise the arrangement of components on the L-shaped logic board are very similar. Compared to the regular iPhone 12, the mini only has two displays cables instead of three, and iFixit also notes "increased grille asymmetry," which it says is likely because the device needs more space for the 5G antenna band.

Like the iPhone 12 and iPhone 12 Pro, the iPhone 12 mini earned a repairability score of 6 out of 10. iFixit said that many components are modular and are easy to replace, but the site bemoaned Apple's continued use of proprietary screws, the devices' increases in waterproofing that can complicate repairs, and the increased chance of breakage due to glass on the front and back of the two devices‌.

Nozuka
The Mini seems to be the most impressive iPhone this year, IMHO.
It's much harder to get the same features into a smaller device.
Score: 18 Votes (Like | Disagree)

This goes to show how a) how this tiny thing can be as fast as many "PC laptops", and b) how revolutionary the OG iPhone was, considering how much smaller that thing was crammed with the latest tech of 2007...

Somebody I know who went from an OG se to an (unhappily at the time) XS, now refuses to downsize to an mini. While choice is good I wouldn’t be surprised if this was the least selling device.

Am I the only one thinking that the anyone using the acronym OG should be made to buy a beer for everyone that has to read it? ?
Score: 7 Votes (Like | Disagree)

whirldy
I got MINImized!!
Life feels lighter with the Mini...
Score: 6 Votes (Like | Disagree)

2ilent8cho
I have my mini, but it still wish it were smaller, it is not mini enough. I did try an iPhone 12 in a shop they were obscenely big.
Score: 5 Votes (Like | Disagree)

Somebody I know who went from an OG se to an (unhappily at the time) XS, now refuses to downsize to an mini. While choice is good I wouldn’t be surprised if this was the least selling device.

Which is pretty much what people were saying about the SE1.
Score: 5 Votes (Like | Disagree)

JitteryJimmy
Happily, proprietary screws are both advice and a warning. They keep 80% of the people who want to go inside from doing so. And that's a great thing. Yes, if you really do want to go inside, you'll have to go spend $3 for a suitable tool.

I love the proprietary screws. My worst phone repairs are when some idiot buys a kit and severly botches a repair - then it's up to me to dig around, waste some time, and tell the customer that it's been totally destroyed by ineptness. Then they claim that no one was inside. Yeah, right.
Score: 5 Votes (Like | Disagree)
Read All Comments