After live streaming a teardown of the iPhone 12 and iPhone 12 Pro earlier this week, iFixit today provided a more in-depth teardown that goes through all of the components in the new devices, revealing several similarities between the two. 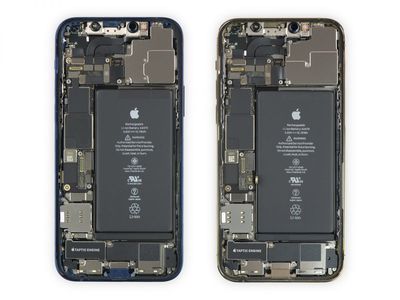 Early testing conducted by iFixit shows that the iPhone 12 and 12 Pro displays are interchangeable and can be swapped without issue, though the max brightness level of the two vary slightly. With just the displays and no other internals removed, the devices look almost identical.

It was confirmed that both the iPhone 12 and iPhone 12 Pro feature the same 2,815mAh battery earlier this week, and iFixit was also able to corroborate this. Additionally, iFixit said the batteries of the two devices are interchangeable.

An X-ray courtesy of Creative Electron reveals the nearly identical L-shaped logic board, battery, and circular array of magnets, which introduce MagSafe support, in the two devices. A separate teardown of Apple's MagSafe charger shared by iFixit reveals a simple design with magnets and a charging coil encircling a small circuit board.

The ‌iPhone 12 and iPhone 12 Pro earned a repairability score of 6 out of 10. iFixit said that many components are modular and are easy to replace, but the site bemoaned Apple's continued use of proprietary screws, the devices' increases in waterproofing that can complicate repairs, and the increased chance of breakage due to glass on the front and back of the two devices‌.

so ifixit wants your phone to not be water resistant simply because they need the business. got it.

No, they are just saying it complicates repairs, which is true.
Score: 58 Votes (Like | Disagree)

Apple_Robert
I am not concerned with iFixit’s score. If I have a problem with my iPhone, I go to Apple for the fix. As expensive as Apple is, I don’t trust myself or any third party company to repair Apple devices.
Score: 29 Votes (Like | Disagree)

then why is the site "bemoaning" Apple's design decisions? it sounds like they have a business to protect, thats why.

They're not, that's just what the article on Macrumors says and how the writer interpreted it. The actual quote from iFixit is "Increased waterproofing measures complicate some repairs, but make difficult water damage repairs less likely." This doesn't really sound like "bemoaning" to me, it's just the facts.
Score: 27 Votes (Like | Disagree)

...which is a better score than pretty much anything else out there. Look at Samsung, Huawei etc scores.

If you need to get the battery replaced, just take it to authorised service instead buying the kit from iFixit.

Authorised service is only slightly more expensive than doing it by yourself and risking breaking it.
Score: 23 Votes (Like | Disagree)

Makosuke
While it's entirely true that some of the stuff done for waterproofing purposes also makes the phone harder to repair, if you give me a choice between more waterproof and easier to fix, I'll take the waterproofing any day of the week. I'm a lot more likely to get my phone wet than I am to want to get it repaired by someone other than Apple.

In fact, of people I know who've broken a phone, half were due to water damage anyway.

Personally in around 8 years worth of two family members using iPhones, we have had zero repairs done but I've gotten my phone wet plenty of times, and not having to worry about rain or other water made for a real improvement in day-to-day user experience.
Score: 21 Votes (Like | Disagree)

It makes harder to repair it for anybody, not only iFixit. They are just saying what they think and give it their score for the repairability. The score is not changing anything, so I don't get why are you angry at them? They just try to do their best to give you an alternative way to do the repairs.
Score: 20 Votes (Like | Disagree)
Read All Comments

Friday October 23, 2020 10:43 am PDT by Juli Clover
iFixit has an iPhone 12 in hand and is tearing it down live, providing a close-up look at the components inside. We've already seen several teardowns so there may not be much to learn, but iFixit's teardowns are always fun to watch. After today's teardown, iFixit plans to provide a more in-depth teardown that will go through all of the components in the new devices. ...
Read Full Article • 25 comments

Thursday December 17, 2020 4:16 pm PST by Juli Clover
iFixit today began disassembling Apple's new AirPods Max headphones for one of its traditional device teardowns, with the aim of determining whether the AirPods Max are repairable to any degree or an "e-waste disaster." The teardown is in progress and will be updated over the course of the next few days. This is an early, partial disassembly that also includes a quick x-ray look inside the...
Read Full Article • 108 comments

Thursday November 19, 2020 3:12 pm PST by Juli Clover
iFixit today shared a teardown overview of the new MacBook Air and MacBook Pro, giving us a peek at what's under the hood. For the most part, these machines look the same as older Intel MacBooks inside, but there are a few highlights. The removal of the fan is the biggest change to the MacBook Air, with the fan having been replaced by an aluminum spreader located to the left of the logic...
Read Full Article • 57 comments

Friday October 23, 2020 8:36 am PDT by Joe Rossignol
Arun Maini today shared a new side-by-side iPhone battery life video test on his YouTube channel Mrwhosetheboss, timing how long the new iPhone 12 and iPhone 12 Pro models last on a single charge compared to older models, with equal brightness, settings, battery health, and usage. All of the devices are running iOS 14 without a SIM card inserted. In the test, the iPhone 11 Pro outlasted both ...
Read Full Article • 282 comments